DIGGING UP THE MARROW: Film Review

Synopsis:
A documentary exploring genre based monster art takes an odd turn when the filmmakers are contacted by a man who claims he can prove that monsters are indeed real.

Despite many a complaint that found-footage films have overstayed their welcome, the current predilection for the mockumentary/shockumentary formula is certainly revitalising said genre; most recent magna opera include What We Do in the Shadows and The Taking of Deborah Logan. Adam Green’s latest offering marries both concepts to bring us what can best be described as a ‘schmockumentary’. The whole concept feels cut very much from the same cloth as Ricky Gervais’ Extras and The Office format but with a horror backdrop. Whilst the film doesn’t find Green exploring virgin snow in terms of the concept, Digging Up the Marrow works on every level by adamantly parodying itself and everything there is to mock about the found-footage genre; and then there’s Ray Wise’s salt-of-the-earth performance which we’ll go into a little later.

So Green plays himself along with long-time cohort, cinematographer Will Barratt as they decide to shadow ex-detective William Dekker (Ray Wise) who claims monsters are really out there, residing in a hole in the ground which he refers to as “The Marrow.” The film begins in the same vein as another faux documentary, Troll Hunter, with the film crew all avowed sceptics at first. Despite Green’s secret hankering to prove Dekker’s tall tales to be kosher he just can’t help giving more than the odd Ricky-Gervaisian WTF glare to the camera during most of the interviews. Initial reticence aside, Adam eventually falls hook, line and sinker for Dekker’s certitude and elaborate accounts.

The only actor, per se, is Ray Wise and his performance garners the most laughs thanks to his outrageously deadpan approach resulting in deadly sharp-edged satirical moments. Many people thought Green’s decision to use such a household name to play Dekker was not a wise one (if you’ll pardon the pun) as it betrayed the authenticity of the documentary concept. I’m not of that opinion and, for me, Wise plays the part with such grace and conviction that the film’s meta documentary guise becomes all-consuming and you can’t help but get dragged into his Jackanories. I could listen to his eccentric monster tales till the cows come home.

Each and every interview between Green and Wise are ostentatious exchanges; everything is ludicrous and cringeworthy but, at the same time, it’s an Adam Green film so we know we should be taking Dekker’s words as gospel. I hope there’s some kind of blooper reel when the film hits home release as there’s surely no way Wise could have maintained that poker face whilst spinning some of his more harebrained yarns.

The film is also crammed to the rafters with priceless cameos. It was great to see editor Josh Ethier get plenty of screen time, trying to knock some sense into Green and his footage. Then there’s some brutally comedic turns from the likes of Tom Holland, Mick Garris and Kane Hodder.

Digging Up the Marrow’s success essentially lies in the fact that all the raillery, cameos and camaraderie serve as perfect bait, reeling the audience into a false sense of security; a trick Bobcat Goldthwait pulled on us recently in his solid genre outing, Willow Creek. Consequently, when Green flicks the scare switch all the jumps are skilfully deployed and I’m fairly confident you won’t see most of them coming. Whilst Dekker’s stories certainly set a jocular tone at first, once the Alex Pardee-inspired monsters crop up Greg Aronowitz’ sculptures are seriously spine-chilling, and then some.

Recapitulating, Digging Up the Marrow remains categorically cunning throughout and will have you bemused, amused, and ultimately perturbed by the time the credits roll. Ray Wise’s Dekker alleges that monsters visit Ihop because everyone loves pancakes and I’m confident Digging Up the Marrow will have the very same effect on people as pancakes; it’s an exceedingly addictive treat to the senses, one that mustn’t go amiss. 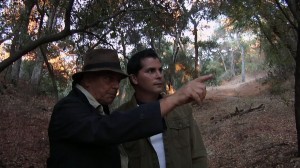