Torture is the newest viral sensation. We are introduced to a Japanese torture game show streaming on the internet. As we meet our protagonist, he’s strapped to a chair including face restraint and mouth held open. It’s a graphic and disturbing situation from the beginning and that sets the tone for the book. It’s an extremely impactful start to the Die-Fi Experiment and we’re thrown into the thick of the action. His wife, Marie, is in a similarly awful position. We discover they are newlyweds on their honeymoon in Tokyo. In between the horrific games during moments of contemplation, our narrator recalls how they got to be in this position.

They are on an internet game show, where it is all about the ratings and social media shares. It brought to mind a cross between The Running Man, Hostel, and Saw. The Japanese hosts dress brightly like geisha, or as adult babies. There is a live studio audience available as they present the emoji and laughter filled show. The over the top presenters and games offer such a contrast to the dire consequences for losing a round. If it wasn’t creepy and deplorable already, this adds a new dimension and makes it as sinister as can be. 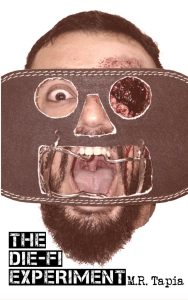 There is clearly a message here about what happens when reality tv and social media go too far – when entertainment can be consumed without empathy for suffering. People cheer at the pain and live-stream on their Instagram and Twitter accounts to their own followers. Everyone is entertained by the spectacle, with seemingly no regard for the reality of what is happening. The author presents the disconnect between reality and entertainment. Despite the heavy presentation of social media, it doesn’t become preachy. The gore and violence is plentiful but not glorified, as you, unlike the viewers, are seeing it from the victim’s point of view.

The concept behind this story really captured my imagination. Social media is a constant point of reference throughout the story – even as part of how the couple got together in the first place. Life is validated through hashtags, likes, and shares. This is a quick read that will make you think. I recommend checking it out.