The book kicks off with Mike Bradley unexpectedly finding himself attending a satanic cult meeting. He’s doing it for a girl, Marnie. Unfortunately, it turns out that these particular satanists are not role playing goths, but actual, legitimate, murderous satanists. They are eager to recruit their all important 13th member, Mike, to their group, The Diabolical Conspiracy. The problem is that once they ask you to join, the only other option is death.

I liked the suburban setting, where it could just as easily have been a PTA meeting instead of a satanic cult. All the members of The Diabolical Conspiracy have normal lives and day jobs when they are not together being satanists. It made me think back to the headlines during the 1980s about the satanic panic that swept the nation. The media and evangelists were convinced of a deep, insidious network of satanists controlling society and institutions. They even went so far as claiming to hear hidden messages in Black Sabbath records played backwards. Those were the days. 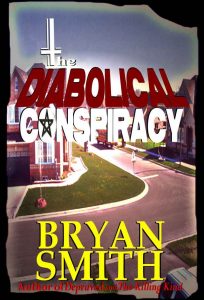 The two main antagonists, Nadia and Marnie, were very interesting characters. Nadia was especially fascinating as the seductive and dominant leader of the cult, oozing control and charisma, with a ruthless viciousness underneath her beautiful exterior. The rest of the circle were so-so and didn’t get too much character development. This is a novella so there wasn’t really enough room to flesh them all out. We feel for Mike having found himself in a difficult position, but he’s not without guilt and has plenty of blood on his hands. He certainly enjoys the physical perks of being a satanist, and is able to keep his conscience quiet during those times. The violence and gore is somewhat sporadic, but when it happens, it really happens. The tone is not especially dark, so it does come as a bit of surprise when some truly shocking and disturbing things happen. That nicely mimics the juxtaposition of the satanists in suburbia though, so it’s well set up by the author. The finale is very shocking, as is the epilogue, with a few wonderful twists.