I was delighted to get my hands on this one because I have heard many a good thing about Kevin Lucia’s writing but, embarrassingly, I have to admit to not reading any of his stuff before. I had no idea what this one was about so went at it completely blind. Did I like what I saw?

This book is written as if it is a collection of two stories so I am going to review it as such.

THE SKYLARK DINER
Welcome to Clifton Heights NY. A smallish town in the Adirondacks with lots of mysteries and lots of evil. Chris is the sheriff. He has come to the Skylark for breakfast with the local priest, Father Ward. They have grown up here together and in their later years they have an allegiance of such. A secret allegiance where they solve some of the evil mysteries of the Heights. Today they have come to discuss two such mysteries during one of their special breakfasts.

The first is a story told in a recently found journal. The story of…

SOPHAN
Childhood friends would do most anything for each other. In Clifton Heights, Nate, Kevin and Gary all hang out with each other. Jake tags along but not because he is invited. Jake is the outsider that everyone else just tolerates. He latches on to Nate, who feels responsible for him in some ways. Jake’s life isn’t the best. Poor and apparently beaten by his father, his attitude to life is not the best and doesn’t endear him to most.

One day, at the Commons Yard Sale, they come across the table of Mr Trung. He seems to have some sort of a hold over Jake that intrigues Nate. Something unspoken that is very creepy.

When Jake asks for Nate’s help to go to Mr Trung’s home to try and get something back that he stole from him, Nate reluctantly goes along. Little does he know he will regret that night for the next twenty years.

Where do I start? This is a story that at first you think is going to be a coming of age tale. In some respects, it is. These are kids growing up as best they can. They all have different lives and different loves. Apart from Jake who just seems to have a lot of hate. Especially for Mr Trung. As characters in a story they are quite simply superb. The specific relationship that Jake and Nate have is amazing. It’s the sort of friendship that shouldn’t fit but does in a strange kind of way.

The plot is one of old. A mysterious game to be played that will determine the fate of the player but a game that changes for each person that plays it. There is a price to pay at the end. One the player will immediately regret when they have to give up the prize of their own. They now want it back and will do anything to get it back but have no idea what they are up against.

This is a slow story. It’s perfectly slow. It builds and builds making you feel more and more tense and creeped out. It will make you hold your breath just to be quite so you don’t give someone away. It will give you chills, and it will emotionally drain you.

THE SKYLARK DINER
Meanwhile back in the diner… it’s Father Wards turn to tell a tale. This one is a story that he was recently told during his time in the confessional. He is pretty sure who the person that told him the tale was. He needs to share what he heard with the sheriff. It’s too horrific not to.

THE MAN IN YELLOW
Stuart is the son of the Pastor of Tahawus. He isn’t necessarily the most Christian of kids. He regularly sneaks out of Sunday night service with his buddy Bobby. Stuart and Bobby aren’t exactly outcasts but with each of them having a disability, they don’t run with the popular people.

When a mysterious new Vicar comes to help out with the Vacation Bible School, Stuart immediately senses that something is wrong. The man in yellow is hiding a secret. A secret that is set to completely change the entire dynamics of Tahawus. A secret that Stuart is pivotal to, but doesn’t realise it yet.

Stuart must unravel secrets held by more than just the man in yellow, to save his very soul and all of the people of Tahawus.

You know what I like about this one? We start off with two main characters in Stuart and Bobby who aren’t the town jocks or the local heroes. We have two young lads who have troubles of their own but just get on with life as best they can. They are extremely likable and you will be rooting for these two right from the outset.

The man in yellow is horrible. When I say horrible, I mean horrible and despicable in every way you can imagine. He is evil personified and as I was imagining him in my mind I actually felt physically sick. The way in which he is described by Mr Lucia is just superb.

The plot is also superb. A small town that doesn’t exactly seem to be a total bible thumping town but does hold to a strong faith. Someone evil comes along to try and take that away from everyone. Stuart is the only one that can stop it from happening.

Tales like this though normally have a predictable run to the final scenes where you can more or less guess the outcome. Not with this little beauty.

CODA
The sheriff and the priest discuss what they can do and where they can go. They understand that after these two stories there isn’t much they can do. Other than keep doing what they are doing and unravel the many mysteries of Clifton Heights. 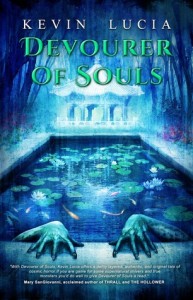 This book is, quite simply, superb. I honestly will not be able to say any more in this review that will do this justice. The way it has been put together in terms of these two men sitting in a diner telling each other stories and then breaking into the stories like some sort of dream sequence is wonderful. You feel so at ease with these two men and can picture them sitting in the diner having a chat. You can smell the coffee and pancakes. You can feel the tension.

The stories themselves are totally different but at the same time perfectly connected. I have seen comparisons to Lovecraft and King with this book. Yeah I can see the Lovecraftian connection and Mr Lucia pulls it off extremely well. The King comparison? Well, don’t shoot me but people that know me know that I have never finished a book by King because I get so bored. I finished this didn’t I? This certainly didn’t bore me in any way. That’s Lucia 1 – King 0.

I could talk about this book all night but to be honest with you, you should just go buy it. This is one that could fall into a few different categories in the end of year round up and to be honest again, it could win them all.

To summarise: Just buy it. There is nothing else I can say.