The Devil’s Well Opens a Gateway to Hell on DVD

“Hell is just below the surface.”

Coming to DVD this month is supernatural found-footage shocker The Devil’s Well, in which a paranormal investigator disappears at the titular site, which just so happens to contain a gateway to Hell.

This short, sharp trailer gives us a good idea of what to expect from the film, which was written, produced and directed by genre filmmaker Kurtis Spieler (Sheep Skin). 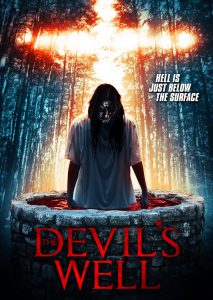 Synopsis:
Karla Marks mysteriously vanishes while conducting a paranormal investigation with her husband into the Devil’s Well, an underground location reported to be a gateway straight into hell, and the site of ongoing strange phenomenon. A year after her disappearance, a group of investigators go back to uncover the truth about Karla, and are faced with evil forces greater than they ever imagined.