The Late Phases director recently wrapped production on the film, which revolves around “…two sisters whose lives change dramatically after going through hypnosis using a mysterious vinyl album recorded in the 1970s.”

Fresh from completing brutal revenger Scherzo Diabolico in Mexico City, Bogliano has brought together a number of backers and co-producers for his latest. Sweden’s Klubb Super 8 initially boarded the project in association with Scherzo Diabolico producer Andrea Quiroz Hernandez, working out of her Mexican company Salto de Fe Films. 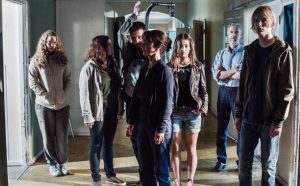 Star of a number of ‘70s European sexploitation flicks, Lindberg is most celebrated for her lead role in vicious revenge pic Thriller: A Cruel Picture, retitled They Call Her One-Eye in the US. The film is a favourite of Quentin Tarantino, who took inspiration from Lindberg’s eye-patch-wearing Frigga for Daryl Hannah’s character in Kill Bill. Lindberg is at the centre of this onset image, in front of director Bogliano.

No release has been set for Black Circle as yet, but expect to see it sometime in early 2017.