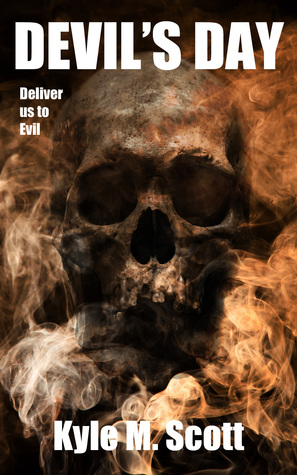 Released in July 2014, Devil’s Day by Glasgow born author Kyle M. Scott joins the growing market of books that categorize themselves as extreme horror, does it live up to the billing. Well a frenetic pace that doesn’t hold back in terms of action and gore certainly helps and Devil’s Day more than grips you with a frenzy that won’t let go.

Devil’s Day pays worthy homage to the 80’s horror scene in a fast paced, highly enjoyable tale of terror and dread as the town folk come up against monsters spawned from the deepest earth, denizens of Hell and they’re searching for the offspring of the town’s founding families.

Nobody quite believed the tales old Mr Winslow told every Halloween, dark tales of secrets, stories passed through the generations, of an age old covenant made with the Devil and Halloween in all its horror has come to the town of Blackhaven once more.

The story follows Emma Sommerville, whose introduction sees her punching her boyfriend in the face as he tries to reach places she’s not quite ready for, Alan’s the boyfriend and as a side story to the main event he’s got some dark thoughts running through his twisted little mind.

Emma’s brother is Timmy, all excited for Halloween, for the outfit, for the goodies and the scary tale that his next door neighbour is going to impart, the story then flits between their family and other townsfolk as monsters start rampaging out of the forests.

There’s some graphic terror and violence that is very well described as the monsters, seemingly unstoppable save for a good old fashioned shotgun blast to the head, reach the town proper after tearing through the farmlands. Amid claws and fangs, there’s no shortage of bodies, severed heads and the like but this is a wickedly good read and one I highly recommend for a horror story that doesn’t take itself too seriously.