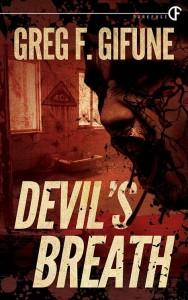 Devils Breath is the literary equivalent of a man lost in a nightmare, drifting toward insanity, unable to escape, whilst at the same time amassing the precarious attention of shady figures that revel in the darkness.

The first line of this review is the first line of Devils Breath and sets the scene perfectly for our protagonist’s trip into a dark world that exists in the periphery of thought. Stan Faulk’s morning itinerary is decided, resolute and fatalistic, the concept of death about to become reality with the aid of a straight razor. Scenes of a failed life drift past his mind’s eye as he prepares for the final moment but the end is interrupted before it even begins with a knock at the door. He opens the door and as if the line that determines the outside from the inside also acts as an arbitrator between sane and crazed, he’s sees himself.

Then his hangover hits and the realization that his previous night comes with no memory, his money is gone and his only clue a plain black business card and the words of a homeless man. Stan Faulk has felt the devils breath, he’s been chosen for something beyond his comprehension in a world that doesn’t exist.

‘Somewhere, at the very edge of my memory… something… but before I could grab hold of it, the memory— or whatever it was— slipped free, drifting away like smoke spiraling from a snuffed candle. In its wake, only fear.’

A powerful cult, secret yet exposed if you know where to look, a drug that surrenders control and a perfect conspiracy theory, if that’s your kind of thing. Coupled with an intriguing character harbouring a destructive past tinged with sadness, and the bare slither of reclamation in a new relationship.

‘We are the nightmares behind your dreams.’

The Devils Breath slips effortlessly between the world of nightmare and the nightmare that haunts reality, between lucidity and insanity, all through a seemingly impenetrable blackness.

Greg Gifune is one of the leading exponents of dark fiction currently on the market today, his work has received a nomination for the British Fantasy Award as well as multiple recommendations for the Bram Stoker Award and the International Horror Guild Award. Devils Breath is released on the 7 July.