WHERE THE DEVIL HIDES: Film Review

Synopsis:
Five young women are suspected of being the devil incarnate by the devout religious community in which they live. According to prophecy, one of the women will emerge as Satan on the day of their joint 18th birthdays to take up a reign of terror and devour the souls of the living. Colm Meaney plays Elder Beacon, the psychopathic, tyrannical leader of the community who leads a campaign of suspicion and damnation against the young women. As the girls are murdered one by one, both Mary (Alycia Debnam Carey) and her father Jacob (Rufus Sewell) begin to doubt whether their leaders truly have their best interests at heart.

The religious cult horror movie is perhaps one of the least celebrated of sub-genres, when you consider the attention paid to slashers, zombies and sharks in the modern age. But often these films benefit from the eye-catching, gothic aesthetic that befits the depiction of a stark, sombre, Puritan society. Where The Devil Hides fits into this bracket.

In many ways, the film’s visual impact is its saving grace. It is difficult to truly engage in either the characters or story, such is the rather uninspiring use of plot and character development. The film essentially plays out like we expect it to; Colm Meaney’s creepy, sleazy depiction of a puritanical preacher who may have ulterior motives for wanting to ‘examine’ the bodies of a group of young women; Rufus Sewell’s stern, yet ultimately caring father figure who seems to fall on the side of pragmatism and rationality in the face of prophecies and predictions (this, despite the fact he has chosen to raise his family in a segregated, rural community of evangelical Christians); and, of course, the disapproving stepmother, who believes Mary and her friends are given too much free reign within the conservative society.

In fact, from the offset, audiences will undoubtedly find themselves correctly predicting each plot development as it occurs, and unravel the true intentions of many of the more dubious characters long before the film’s twists have been executed. One particularly uninspiring plot development comes in the form of Trevor, played by Thomas McDonell, a young man from the outside world who takes an interest in Mary and ultimately comes to her rescue. His character becomes the standard ‘saving grace’ boyfriend horror trope, complete with local sheriff dad.

Having said that, the look and feel of the film is captivating. Set mostly within the grounds of the community, its adjacent woodland and lakeside setting, Where The Devil Hides has something of a Friday the 13th (1980) feel to it, but also draws heavily from earlier religious cult films like Wes Craven’s Deadly Blessing (1981).

Problems aside, this is a well-crafted and beautifully shot film that manages to maintain a cold, stolid aesthetic throughout, acutely reflecting the ideological prison in which many of the characters find themselves. There is certainly enough visual horror and gore throughout the running-time, which, when combined with the film’s quick pace and entertaining set-pieces, should leave audiences fulfilled by its close. The film’s climax, however, falls a little flat, and it is a shame that so much built-up tension and characterisation ultimately goes nowhere. This is sated somewhat by the revelation of one final twist at the end; however audiences may find themselves having predicted the outcome from the offset.

This DVD release from Kaleidoscope features a decent print and presentation of the film, but unfortunately comes without any of the bonus features viewers have come to expect from new releases of this kind. It is unfortunate, as there is plenty within the film itself – not to mention within the concept of closed, religious communities alone – that might have warranted a decent documentary or ‘making-of’ featurette.

In all, however, this is one of the better new releases so far this year, and will undoubtedly find its own cult following, given strong and crafted cinematography and some convincing performances from big names. 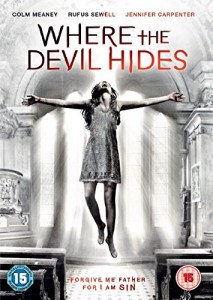