Synopsis:
Sisters Abby and Rebecca make a horrifying discovery when they find a harmless looking object in the woods near their family’s cabin. The small black sphere is the key to a shocking mystery that will change the course of human destiny.

Whilst I have never been the world’s biggest fan when it comes to alien abduction films, every once in a while some do manage to impress. Memorable examples would be Scott Stewart’s superbly shot Dark Skies or Joe Begos’ genre-bending Almost Human. Whilst The Device doesn’t quite reach the stars, director Jeremy Berg’s latest effort is a raw, intriguing and shuddersome, albeit rough-around the-edges, slow-burner.

Berg’s directorial touches conjure up an atmosphere of unease which is ramped up to the hilt with Joseph Molner’s whirring, stirring soundtrack. That said, what separates The Device from its counterparts is the particular emphasis placed on the emotional impact of the whole chain of events – Leigh Janiak’s Honeymoon sprang to mind more than once whilst watching this one. Rather than going overboard with the alien FX, Berg and fellow scribe, John Portanova are clearly far more interested in the rapport between the two sisters, Abby and Rebecca (Angela DiMarco and Kate Alden) and Abby’s fiancé, Calvin (David S.Hogan).

Images of aliens are used sparingly, making for a much better film, particularly as the special effects are not too hot, resembling something that could have been concocted by the teams that brought us Mac and Me and Independence Day. OK, maybe they aren‘t quite as bad as I’m making out and the budget surely didn’t help matters… That said, given the aliens’ brief screen time the SFX never really undermine the film’s effectiveness.

The script works particularly well in terms of maintaining the audiences’ interest, revealing secret after secret as the film progresses. As soon as the two sisters reunite it’s clear something untoward happened previously and the audience is kept on tenterhooks for the film’s duration to discover what went on when they were younger and what “the device” they find in the woods actually is.

The film does, unfortunately, stumble sporadically when it comes to some of the dialogue the actors had to work with. Alden puts in a sound performance as Rebecca, tormented by a spoiler that I’m not willing to reveal and her scenes with DiMarco are particularly impressive. My main gripe is with David S. Hogan’s character, Calvin. His particular habit of explaining the obvious slowly started to vex me – we all know what aircraft black boxes and UFOs are so why he had to explain these concepts to his fiancé just felt like unnecessary extra baggage. I’m not saying Hogan isn’t a fine actor but his lines just ended up feeling excessively prosaic for my liking. This is such a shame because, other than that, the film goes from strength to strength with its twists and turns and brims with originality, despite the odd textbook alien abduction sequence.

In short, The Device spins a tale that pulls its audience in and, despite the dialogue becoming bearably tedious and disdainful at times, it was a joy to see a more character-driven take on the alien abduction genre and for that reason alone it deserves a watch.

If a calculatingly creepy and consuming horror film is what you are in need of then I highly recommend The Device which is available now over at TheHorrorShow.TV here http://thehorrorshow.tv/movie-display/device-2014 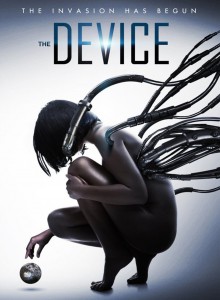