Details Emerge for Stephen King’s Next Novel The Outsider

The latest Stephen King news is never far away, but it’s all the more exciting when it concerns a news novel from the prolific author. King’s next novel will be 576 pages – quite short when compared to some of past tales – and will be titled The Outsider.

The Outsider will be released on 22nd May 2018 and the synopsis is as follows: 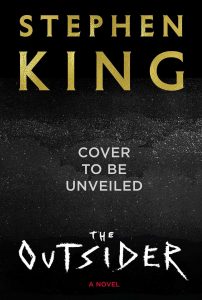 Synopsis:
An eleven-year-old boy’s violated corpse is found in a town park. Eyewitnesses and fingerprints point unmistakably to one of Flint City’s most popular citizens. He is Terry Maitland, Little League coach, English teacher, husband, and father of two girls. Detective Ralph Anderson, whose son Maitland once coached, orders a quick and very public arrest. Maitland has an alibi, but Anderson and the district attorney soon add DNA evidence to go with the fingerprints and witnesses. Their case seems ironclad.

As the investigation expands and horrifying answers begin to emerge, King’s propulsive story kicks into high gear, generating strong tension and almost unbearable suspense. Terry Maitland seems like a nice guy, but is he wearing another face? When the answer comes, it will shock you as only Stephen King can.

The promise of strong tension and unbearable suspense sounds extremely exciting, so we can’t wait to see the events unfold in The Outsider this May.