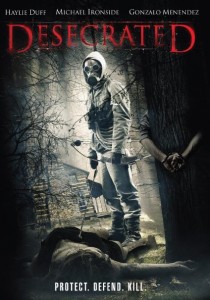 Synopsis:
A group of friends travel to a holiday home for a weekend away only to find themselves pursued and attacked by a militarised psycho.

With a plot so thin it could have been penned on the back of a postage stamp or tip of a drawing pin, this (yet another) madman stalking friends in the forest feature, resounds like an involuntary fart from a carcass. Symbolising one of the many dying breaths of the stalk-and-slash sub-genre or a communal sigh/ yawn hybrid from horror fans all over, those who have all been subjected to this cash-in claptrap a thousand times before. Despite the horror community’s ultimate, undying love for slashers, cemented and stoked by countless classics over the years, its easy to spot when a film is exploiting it’s target audience and underestimating the genre fan’s intelligence. Desecrated goes some way to testing our affection by insipidly worming every stalk-and-slash trait into a skeletal plot-line and then cosmically botching the execution. 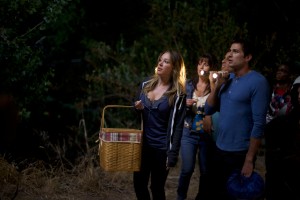 Cardboard cut-out characters ramble by car to a cabin in the woods, courtesy of protagonist Allie (Haylie Duff) whose father Tom (a mostly absent Michael Ironside) owns the property. The hero/ heroine, virgin/ nerd, promiscuous female, junkie and jock douche alpha male are all established along with their back-stories and reasons for the trip. These are relayed just in time before they all take turns to be massacred, both in textbook fashions and the order expected. Upon arrival, the troupe are greeted by Ben (Gonzalo Menendez), a cut, stern and determined property “caretaker” who takes a disliking to most of the crew after they tactlessly flap into the personal space of a local ex-military nut-bag: breaking into his scary, ramshackle caravan to have sex and take drugs like meddling frat idiots.

A grungy looking skater neighbour is introduced as a potential killer/ suspect/ culprit/ victim just before the antagonist decides to wipe out most of the intruders using several self-assembled A-Team style death traps (landmines, trenches, knives on sticks etc) along with the obligatory arsenal of cross-bows, hand-cannons, sniper rifles and garden tools. Not everyone dies but it’s no stretch of the imagination to figure out who’ll most likely pop it first, winding up pulped or extravagantly lacerated. But what isn’t clear is whether or not the killer’s identity is supposed to be a secret or can be taken as a matter of fact from the outset. You don’t have to be Sherlock to figure out who’s doing it. The trailer reveals this for a start, and their identity is glaring even before the first main cast member is slain, but Desecrated never totally divulges until at some point halfway through. 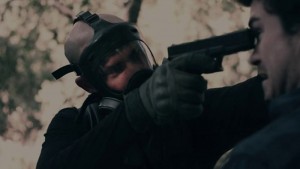 Limbs are hacked then strewn or plopped into jars, a tongue is snipped and pickled while some cast members are punched in the face until dead and then shot in the head for good measure (in the film’s most brutal/ best death scene) while others go on to live possibly happy lives. Its main antagonist isn’t too trite a formation or overly pantomime in style/ design. Despite Desecrated gasping for a little more colour and innovation, the villain is well furnished with an MO, dubious past and the obligatory psychological defects to trigger a kill frenzy. But they are, unfortunately, also poorly brought to life via a mechanised performance, over extravagant, drama-school psycho blurting with a suave, strategic overconfidence that misleads and contradicts their supposedly fractured disorder. Their most furtive and intriguing features are disappointingly unveiled at too late a stage to be relevant, when most viewers will have already given up, been distracted by their cell-phones or a big pile of laundry/ paint drying.

Plot revelations are withheld until the finale then flippantly deployed in the form of anticlimactic twists which do nothing to re-attract our attention. Had they been calculated, teased sporadically and strategically placed while relating to characters the audience actually cares about, Desecrated could have amounted to a much grander work. Enthralling the audience instead of boring them senseless by having the cast repeatedly run around a forest before dying unimaginatively. There is a scintilla of novelty nestled within Desecrated, in the antagonist’s origins and a back-story involving blackmail, but these facets are not efficiently extracted and utilised so serve little purpose overall. 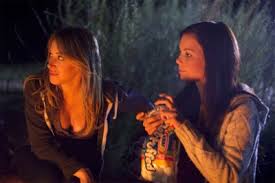 In time, slasher films will probably die with the medium/ rest of us, or transcend into another format because we love them so much. For the moment, like many of it’s tool-wielding antiheroes, they’ll return again and again, in various guises and with all of those well-trodden, trait-laden tropes and ills we love and hate and hate to love and love to hate. Hopefully some will break boundaries and burn into the brains, hearts and retinas of future generations as the likes of Halloween and Elm Street did to older viewers. Every hack, stab, gasp, stammer and regurgitated trope forms part of the sub-genre we, as horror fans, will always have a fondness for, but unfortunately Desecrated is simply a blip that will peter into video bin obscurity. Irk the darkest corners of lesser known streaming sites or rot, in physical form at car boot sales in rain damaged cases, before devolving into landfill and the corners of our subconscious, where it will serve a greater purpose than as a bungled work of art/ entertainment. No extras other than a trailer, which does a great job at making the film look half decent.