Descend into Madness with the Trailer for Monday at 11:01am 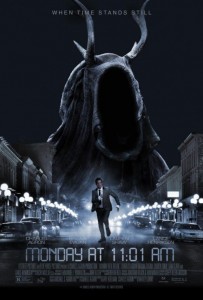 If there was ever a film that needed a change of title it would be this. Monday at 11:01am is just not a suitable film title, we’re afraid to say. A film of this type needs something a little more foreboding and snappy.

Nonetheless, the trailer for the film – which you can watch below – is actually quite decent. It has elements of 1408, The Shining, the TV show Wayward Pines, Kill List and even Groundhog Day as it conjures up a quietly menacing and mysterious atmosphere. If the film itself can maintain this level of mystery and threat, we could be looking at a promising psychological horror film.

Synopsis:
While Jenny shops in a local boutique, Michael stops off at the local watering hole, where he meets a friendly bartender (Lance Henriksen) and a sexy temptress (Briana Evigan). Michael declines her overtures, but even stranger events take place in a local hotel – such as ghostly happenings in Suite 327, the sounds of violent lovemaking that only Michael can hear; and a cult of Druid worshipers who suddenly emerge from the local forest and chase after Michael. Doing the smart thing, Michael and Jenny head out of town – only to discover that their only escape route, a mountain tunnel, is blocked by the Highway Patrol.

There’s no release date yet for Monday at 11:01am, but we promise to keep you informed when there is one.