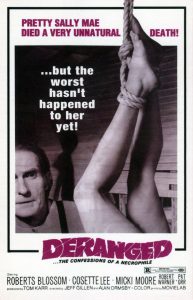 The true story of Ed Gein – the American serial killer and body snatcher – has inspired many famous horror films, including Psycho, The Texas Chainsaw Massacre and House of 1000 Corpses. Deranged, released in 1974, is one of the most literal interpretations of the Ed Gein story, and though mainly remembered for its lurid ‘brain-scooping’ scene, the film is a surprisingly sensitive depiction of mental illness. In spite of its exploitative title and tagline (Deranged: The Confessions of a Necrophile), it is actually a dark examination of loneliness and grief, a film that explores some of the psychological reasons that can drive a man to commit a murder.

Rural eccentric Ezra Cobb lives alone with his mother, caring for her as she loses more and more of her faculties. When she finally dies, Cobb’s loneliness forces him to lovingly preserve her corpse, though he soon realises he needs additional body parts to keep her intact. Soon, Cobb is bringing home more bodies from the local graveyard to keep her company, and it isn’t long before he starts looking for even fresher corpses, killing two innocent girls out of deference for his late mother.

But despite its gruesome source material, Deranged rarely feels cheap and exploitative. Directors Jeff Gillen and Alan Ormsby work hard to show that Cobb is driven by emptiness and despair, rather than psychological cunning. The scenes immediately following his mother’s death are genuinely moving, and it’s painfully obvious that Cobb doesn’t know how to function without the direction of his domineering mother. Of course, that’s not to say that Cobb is a likeable character. He murders two women because he can’t bear to live in a house without a mother-figure, but it’s clear that we are supposed to feel pity for him too – mainly because his mental health, which is already fragile, is what causes him to commit these crimes.

As such, the relationship between Cobb and his mother is integral to the story, and her presence – cold and overbearing – haunts the film long after her death. We see flashbacks of her reminding Cobb about the sins of the flesh and how women are not to be trusted, and it’s interesting to see how this affects his relationships with other characters in the film. In one scene, Cobb even dresses as a woman, wearing the face and scalp of a cadaver in order to please his dead, rotting mother. This is never played for laughs, but as a sad and dangerous example of untreated mental illness. It almost goes without saying, but Roberts Blossoms – best known as Kevin’s next-door neighbour in Home Alone – is fantastic in the role of Ezra. 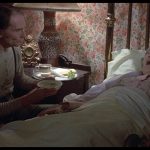 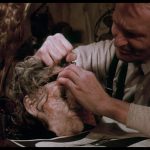 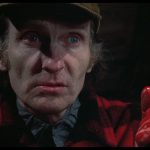 When it comes to the grislier aspects of the film, Tom Savini (Creepshow, Dawn of the Dead) creates some truly astonishing visual effects. The much talked about ‘brain-scooping’ scene (in which Cobb saws through the skull of a severed head and scoops out the eyeballs and brain) is as grotesque as it is fascinating, and feels less gratuitous than expected. The calm, meticulous way that Cobb violates the head tells us something more about his character, adding to the story overall. It also conjures an interesting mixture of emotions in the audience, who feel a combination of pity, sadness, hatred and disgust for him at the same time.

Billed as little more than an exploitive retelling of the Ed Gein murders, Deranged is actually an interesting attempt to explore the psychology of a serial killer, examining the different factors that led to his murderous obsession. Though not as artistically arresting as other films inspired by the same story, Deranged is more accurate and authentic, and brings an emotional weight that is often lacking from these movies. For those who like to see the very human qualities behind a killer, Deranged is a truly unsettling mix of true-crime and tragic horror.