Synopsis:
A rotting corpse serves as a storyteller for 7 tales of suicide, murder, and death. 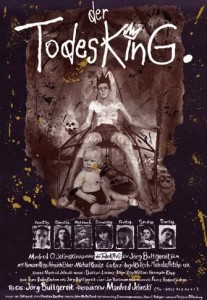 German auteur Jorg Buttgereit is the undisputed godfather of post-modern horror. His work has a unique look that sets it apart from any other filmmaker in the genre. When he released Nekromantik in 1987, he took horror in a bold new direction. He brought an avant-garde artistic style to the table, one that can be found in every one of his films. If one were to properly describe them, they’re ‘by the counterculture, for the counterculture.’

Der Todesking is the perfect example. Buttgereit’s second film takes us on a journey that personifies death and despair. More than that, he does so without reusing clichés you’d find in many horror films from the time period. This is a story of degeneration, and a bleak one at that. You’ll find yourself questioning you own morality and mental state once you’re through.

Our story is told in a unique narrative style. A decaying corpse known as the ‘Death king’ serves as our narrator. We never hear a word from his lips, but his presence in between each tale dominates the story as our guide. Der Todesking is collection of 7 vignettes, each represented by one of the 7 days of the week. In between these morbid tales, we witness the gradual decay of our host. Buttgereit’s use of time-lapse photography during these sequences is nothing short of pure genius. Beneath all of the grotesque imagery and death, there’s a perverse beauty, and a bold artistic statement. 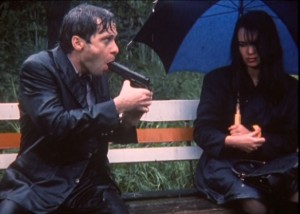 Rather than hash out a string of intricate and excessive death scenes, we’re brought into a world that represents the dark side of humanity. We’re introduced to people who lack the ability to carry on, and can’t go on living. Throughout much of the narrative there are no villains, just victims. The primary theme is hopelessness, and the bleak realization that there is no positive outcome. Herman Kopp’s soundtrack helps build an atmosphere of isolation, brilliantly coinciding with Buttgereit’s fluid camerawork. This really establishes a link between the world of fantasy and reality.

Although suicide and degeneration are the two dominant themes established, they aren’t the only ones to be found. In one of the films more memorable sequences, Buttgereit openly mocks the infamous ‘Ilsa’ series. Here, he Shifts focus from the bleak aspects of humanity, to tread into the world of torture and sadomasochism. It’s easily the most visceral part of the film, but not one without purpose. This whole part of the narrative is a commentary on contemporary horror, and it’s effect on our everyday lives. 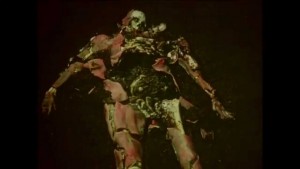 This whole scene breaks away from the unconventional nature from the rest of the film. It successfully mocks the trends we’re used to seeing, and reinforces the avant-garde style of the one we’re currently watching. It also contrasts with the overall feeling Der Todesking is attempting to establish. This is not your typical horror film. This is the horror you find in everyday life, the very real situation of depression and hopelessness. Through it all, you’ll see the stereotypical horror turned upside down, and turned into an artistic endeavor.

There’s no other film like this, and there never will be again. This is a work for the underground, and those who wish to walk along the lines of the outer fringe.