Demons is the first book in a new series surrounding a detective. With his move to the London Metropolitan Police, Detective Inspector Daniel Graves is unfortunately getting more familiar with seeing dead bodies. A particularly gruesome late night murder falls to him and his partner to investigate.

Catherine is a freelance demonologist, assisted by Marcus. When she sees a local news report about a family who appears to have an evil presence in their midst, she offers her services to remove the demon. Things don’t exactly go according to plan as the bodies begin to mount up and the paths of the demonologist and Inspector Graves come together.

Our main character, Graves, is likeable enough, as are the ensemble of others in the story. None of the others had remarkable personalities except for Catherine, who has more depth than it first appears. I did like the tie-in to the satanic panic media frenzy of the 1980s in England, and references to paranormal investigators Ed and Lorraine Warren, who are recently back in the spotlight due to The Conjuring movies. 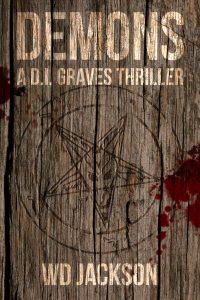 Demons is a little slow in places while we wait for the two threads of Catherine and Graves to connect. When Graves is pulled into Catherine’s case the pace picks up and I became much more engaged. This is where the scares and horror begin. There are some genuinely creepy and panic inducing moments. When there is violence, it is savage and brutal.

There are many aspects of a police procedural in this book. For the most part I enjoyed it. It did drag a bit, as you would expect a real case would. Some aspects of the book work really well, but not all of them. There are plenty of twists and turns and red herrings on the two cases. While it is a great police thriller, the horror potential didn’t really live up to the suggested promise of earlier parts of the book.