Demonic: An Interview With Dustin Milligan 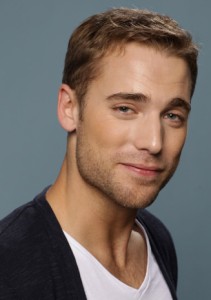 Dustin Milligan is an actor who has taken on a number of roles both on television and in film. Horror fans will recognise him for his appearance in such genre films as Final Destination 3, Slither and Shark Night. His latest horror project, Demonic is directed by Will Canon and is produced by James Wan (Insidious) and will be screened during this year’s Film4 FrightFest.

In Demonic, Milligan plays John, the only survivor of a group of teens who were killed while trying to summon ghosts. He is joined by Detective Mark Lewis (Frank Grillo) and Dr. Elizabeth Klein (Maria Bello) whom during the interview learn that there are forces that you should never mess with.

To celebrate the upcoming screening at FrightFest and to celebrate the release of Demonic on DVD on 7th September, we caught up with Dustin to discuss his involvement with the film and what it was like to star opposite Maria Bello and Frank Grillo.

SCREAM: Thanks for taking time to speak with SCREAM about your involvement with DEMONIC.

Dustin Milligan: No problem. Thanks for having me.

You have been involved in a number of horror roles over the course of your career. Are you a fan of the genre?

You know, I am a fan of the horror genre. I’m more of a fan of Sci-Fi horror than horror specifically. I like the idea of horror especially when films are grounded in a fairly relatable reality. I like the idea that we are never that far away from the supernatural or something fantastic occurring in our lives. So horror is a nice way to escape from the normal humdrum of everyday life. As far as being in them, as a young actor you are more eligible for horror movies and that’s what comes across my desk in my career so far. Like I said, to partake in it I see it as an opportunity to portray real characters by experiencing surreal circumstances.

I understand. Tell me how you got involved with Demonic?

Same old story really. I got the script and took a look at it. I liked it immediately for what it was; it was a little bit of found footage and a story about a group of kids that visit a potentially haunted house. I went in and read for the part and it was nice to play two characters or rather two different sides to my character John as in before and a different version of John after. Plus it was a fantastic opportunity to work with people like Maria Bello and Frank Grillo. So that’s a challenge that I think any actor would love to jump in.

I bet it was. Without giving too much away, what can you tell me about your character John?

He starts the film as a skeptic before arriving at the house and after everything that happens. He struggles to believe that what is happening to him and his friends is the result of something supernatural and he can’t believe what he is seeing. He’s in total shock after the events so yeah he was a great character to play.

What was your reaction after reading the script?

I was pleasantly surprised. That was the whole thing, that you think you can keep the movie as one thing but as you move into the third act that they are doing something subtly different with the genre. It uses the found footage aspect but it doesn’t make it cheap. That was it… Max La Bella is a fantastic writer and Will Canon, our director, also had a hand in writing the script as well so I knew that a lot of thought was going into it unlike the more cheap and fast put together horror movies out there. I knew they were wanting to do it right and I think they succeeded.

What was it like to work with Will Canon as your director?

He was great. I really like Will. He had a hand in some of the writing as well which I always like when compared with a director who is paid to show up, shoot it and go home. Will cared about the final product enough to make those tweaks. Some people may feel uncomfortable with that but for me, I loved the fact that we were a young cast so there was a nice opportunity for relatability there in a way that we all felt like underdogs. Will is a great guy. He is very smart. It was a challenging shoot in that we were all in one house for the entire shoot. It was a little cramped and hot working in Louisiana and it was full of all those kind of reasons that would hinder the entire thing but, being a smart guy, he was able to manage each day well and got us all through it. It’s because of that I would like to, in some way, applaud him as the final product really says something about his skills. He was able to delegate, deliver in time and always put the audience at the centre of making the film. So yeah, I am a big fan.

In the film you star opposite Maria Bello and Frank Grillo, two actors we greatly admire. What was it like to work alongside them?

It was great. Working opposite Maria was cool. Even though our scenes together are spaced out across the film we only shot for two days together because our scenes take place in the same location. It is always exciting for me to see an actor who is as good as her and as accomplished and professional as her. To sit opposite and watch their process even more so specifically when you’re involved in that process it’s fantastic. I love learning whilst I’m getting paid so it is what I think makes my job the best job because if you’re getting paid to learn you’re able to constantly sharpen your tool set whilst doing what you do. Maria was lovely and to play such an intense set of scenes with her was such a cool opportunity.

Working with Frank as well was fantastic. He’s really blowing up right now. He was a great guy too and someone I take very seriously. In the film he plays a detective and could have easily come in and done the cliched version of a detective that we have all seen but he was someone who wanted to make sure that he was holding the gun right and that he was following the right kind of police protocol. His attention to detail was amazing and something that I really admire so again I was fortunate enough to learn from him where possible. 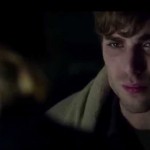 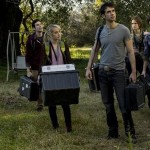 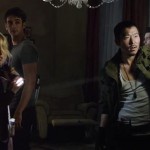 As you mentioned before you were all on location at the one house so things were a little cramped and it was hot. What was it like on set with the rest of the cast?

It was good. We were all staying together in this casino hotel just across from the house on the outskirts of Batten Rouge. We were just constantly texting each other, the whole cast, we were all part of this group text chain. It was pretty funny most of the time and we talked about the stresses of the day. Even sitting in the room with each other we would be able to send a group text that only the five of you are getting which was a great thing in that way. Plus we were all staying in a great hotel where we had drinks at the weekend and gambling in the hotel so it felt like summer camp.

The film is set inside an old creepy house. Did you experience anything supernatural on set?

Not really but before we arrived at the house Will set it up to have actual ghost hunters sort of set up shop in this house and take us through an ‘authentic ghost hunting tour’ of the house. They did a lot of research for us and helped us with our characters as far as we were a bunch of kids hunting ghosts in the film. During this there was some spooky stuff going on there. There were some sounds, some creaks and groans. We were all definitely freaked out by them and our hairs were standing up on the back of our necks kind of thing. Once we started shooting the scariest thing that happened was the weather in that it rained and we had to do our best to avoid getting our costumes muddy… you know… fancy actor stuff, some scary fancy actor stuff (laughs).

With Demonic I’m glad that it doesn’t fall into the cliches of those things and it didn’t turn into found footage that wasn’t justified or overused. Again, because the film switches from the recollection of my character John of what happened in the house that led up to all these horrific murders to the present day where an interview is being given by Maria Bello’s character and Frank Grillo, how the film jumps back and forth in time in order to solve this mystery is to me what makes it a horror film as much as it does a suspense thriller. I like the fact that it straddles those two genres and is not specifically one or the other at any given time. I like the way that Demonic offers audiences a lot more than your standard horror movie in terms that it is so heavily engaging.

So what’s next for you Dustin? 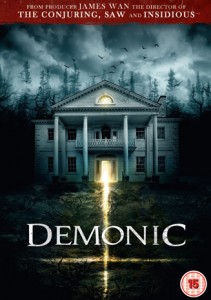 I have also an online release that you can download, a genre film that I produced, wrote and co-starred in with my collaboration partner called Bad City. It’s an intentionally bad ’70s buddy cop movie… it’s kinda like Kung Fury but it’s not nearly as crazy in terms of it’s special effects and stuff. Think of it like Kung Fury meets Naked Gun. We’ve been taking it to a number of festivals but if anyone is interested they can visit badcitymovie.com and check it out.