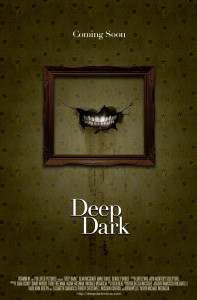 Synopsis:
Hermann, a failed sculptor, is about to kill himself when he finds a strange, talking hole in the wall. The creature in the hole has the power to fulfill his wildest dreams, but things go horribly wrong and when the killing starts, Hermann is thrust into the worst nightmare of his life. Deep Dark is a twisted tale warning you to be careful what you wish for, because it just might get you.After Cannes it is fair to say that we are well and truly into the festival season and as such there will no doubt be some films that over the course of the next few months will stand out over others. Some will be for all the right reasons, some for the wrong reasons and some will show things that you might not have seen before. So ahead of it’s European Premiere as part of the upcoming 2015 London Sci-Fi and Fantasy Film Festival, it pleases me to confirm that Deep Dark is a fantasy horror which falls comfortably into the latter.

Directed by Michael Medaglia, Deep Dark is an interesting and deeply twisted journey into wish fulfillment. Both deeply disturbing yet strangely alluring, the film offers audiences something inherently crazy and incredibly macabre. Interestingly enough, despite the very out-there moments of the film which on paper would seem silly, Medaglia keeps tight reins on the performance of the piece crafting a film which never crosses over to madness. Instead the film is kept on course by his strong sense of direction aided by an incredible set design.

Heading up the cast Sean McGrath plays the lead role of Hermann, a tortured wannabe artist who until discovering the hole in his wall continually struggles with his art. His performance perfectly captures the vulnerability of the role and as the film goes on it was part of the films appeal to watch the growth in his character as his interactions with the hole allows him to realise his full potential.

Providing support to McGrath is Anne Sorce who plays Gallery owner Devora Klein. A focussed and empowered business woman she quickly dismisses Herman’s talents after a disasterous art show. Her role turns from a cold-hearted bitch into a potential love interest for McGrath as his art improves. I think Sorce’s performance doesn’t feel as fleshed out as McGrath’s but that doesn’t mean that she does a decent job.

As for the rest of the cast there’s not really much else to say other than everyone delivers what is necessary in order to sell the credibility of the plot.  However, the real unsung hero of the film here is the voice work of Denise Poirier who voices The Hole. Coming to the project with plenty of voicing experience, Poirier’s performance is sold entirely on the sound and tone. Throw in some feminine mystique and what Poirier does is deliver what essentially is a fully realised character in her own right.

After reading the synopsis of Deep Dark I was curious if the film was going to become too over reliant on comedy and thankfully it does not. The film does take a little too long to set up the story but that aside Deep Dark effectively combines great performances, smooth cinematography from Francisco Bulgarelli and Medaglia’s skilled direction to make Deep Dark thoroughly enjoyable. So if like me you have a fondness of the strange and bizarre then Deep Dark is a film worth seeking out.