We recently showed you the trailer for the surprising sequel Deep Blue Sea 2 and now we can share the release date with you. Deep Blue Sea 2 will be released straight to DVD and Blu-ray on 17th April 2018. 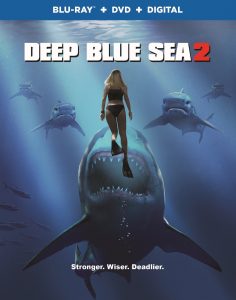 Even though the trailer didn’t boast anything particularly new with the film, we are looking forward to seeing these smarter and faster sharks wreak havoc. It does look more like a remake than a sequel, but let’s hope there is more to this sequel than meets the eye.

Darin Scott (Something Wicked, Megachurch Murder) is in the director’s chair with the cast that includes Michael Beach, Danielle Savre, Rob Mayes, Luly Spangenberg and Darron Meyer. Deep Blue Sea 2 will be drifting straight to DVD and Blu-ray this April.