In The Deep Art Has Real Bite

With The Shallows currently playing to a positive reception, another shark thriller is surfacing on home video soon. Originally titled 47 Meters Down, In The Deep is hitting US DVD, Digital HD and On Demand on August 2nd through Dimension Films, Anchor Bay Entertainment and Starz Digital, and the artwork for the release has now been revealed. 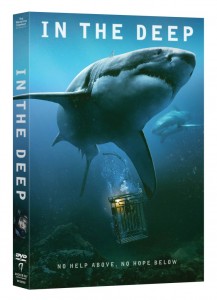 With a severed line dropping a diving cage right next to two of the dead-eyed, toothy buggers, the newly-released art sets the scene for a terrifying undersea nightmare. And with a reported 95% of the shoot having taken place underwater, there appears to be little respite for the two sisters trapped in the cage.

In The Deep dives into a world of two sisters who become trapped at the bottom of the ocean when a diving expedition to observe sharks goes horribly wrong. When the cable attaching the observation cage to the boat breaks and the cage sinks to the bottom of the ocean, the sisters must figure out a way to get back to safety battling injuries, lack of oxygen, and, worst of all, blood thirsty, great white sharks.

In The Deep is directed by Johannes Roberts (pictured), fresh from his well-received The Other Side of the Door.