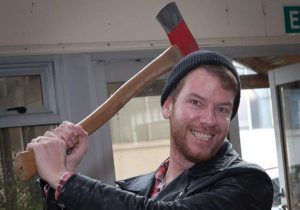 Howden announced over a year back that he had already completed the script for what was tentatively titled Deathgasm Part 2: Goremageddon, but before he gets to that, the Kiwi director is shooting violent action comedy Guns Akimbo, starring Daniel Radcliffe. The news comes courtesy of Deadline, who revealed:
“…the story follows Miles who spends his days in a dead-end job, pining for his beautiful ex-girlfriend Nova. His mundane existence is turned upside-down when he finds himself enrolled on a dark net website that forces complete strangers to fight in a city-wide game of death so that their gladiatorial battles can be live-streamed worldwide to a fanatical audience.”

Audiences would surely welcome what sounds to be a more comedic take on the Battle Royale formula, which has informed so many genre films from The Purge and Hunger Games franchises to Greg McLean’s recent The Belko Experiment. Then there’s Radcliffe (pictured in Swiss Army Man), who has impressed many a horror fan with his post-Potter output.

Deadline gave further story details as follows:
“Contestants are chosen by a clandestine gang known as Schism, who handicap the weaker contestant to further stack the odds against them. Initially, Miles’ lifetime of running from his problems pays off as he manages to elude his first opponent but when Nova is kidnapped, he must finally stop running and overcome his fears to fight for the girl he loves.”

Howden also penned the script for Guns Akimbo, which Joe Neuraurter and Felipe Marino will produce for Occupant Entertainment.