The horror genre was built on the independent spirit of filmmakers and actors who refuse to let budgetary constraints stand in the way of making their dreams come true. Embracing these DIY ethos, some of the most iconic genre filmmakers have crafted seminal works of art that will live forever – including George A. Romero’s 1968 masterpiece Night of the Living Dead. It’s filmmakers like this that ensure the genre keeps thriving, and if Night of the Living Dead has taught us anything, it’s that these movies can endure a long shelf live. The same can be said about Tobe Hooper’s Texas Chainsaw Massacre (1974) and Sam Raimi’s Evil Dead (1981), but even they had more to work with than Death Walks. 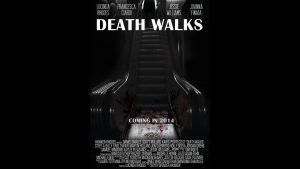 The reason that I mention Romero’s film is because Spencer Hawken’s Death Walks will be reminiscent of its sequel Day of the Dead (1978) at face value, as it also entails the undead running amok in a shopping mall, only here it’s a British one. That’s where the comparison ends, however; Death Walks is a different kind of zombie film. In fact, it has more of a John Carpenter meets Lucio Fulci vibe, and the entrapment of its unfortunate protagonists as they look for a way to escape seems more from the school of Assault On Precinct 13 (1976) due to its prodding synth score and sense of claustrophobia.

The plot is fairly simple: a group of people get stuck in a shopping centre as the reanimated dead torment them. It doesn’t break any new ground at all, but it’s refreshing nonetheless as it oscillates between humorous and psychological surprisingly well – and they’ve accomplished so much on a zero budget. To see a film that looks better than a lot of low-budget fare that actually has a budget is quite the achievement.

In the current UK political climate following Brexit, many are concerned about the future of the country’s film industry. But, if anything, Death Walks is a prime example of how a quality film can be made with shoestring resources. The film is also as DIY as it comes, as the budget was non-existent. The movie’s creation was built on the good will of the British public, who loaned their acting talents and locations so the movie could be brought to life.

The cast all do a brilliant job, especially considering how new to the profession many of them are. You get the impression that everyone involved had fun making the film, and it gives the movie a sense of vibrancy that’s rather infectious. On top of that, the script is strong and genuinely witty and funny at times; there are a few chuckles to be had throughout without ever coming at the expense of the scares.

There are some familiar faces to be found – especially if you know your British television – but the undeniable star attraction is Francesca Ciardi (of Cannibal Holocaust fame). To attract professional actors is a testament to the belief in Hawken’s experiment – to prove that a competent film can be made with no money – and the director pulls it off tenfold. 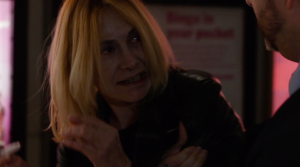 Death Walks is the little engine that could. While it doesn’t rewrite the rule book of the zombie sub-genre, it does refreshing reminder that the undead still have some life in them after all. All aspiring filmmakers should see it at least once for inspiration; if anything it’s going to reaffirm that DIY filmmaking is stronger than ever right now. With a budget Hawken’s could potentially create something special. Without one, he’s no slouch either.