Death from Below in Trailer for Grindhouse Throwback She Kills 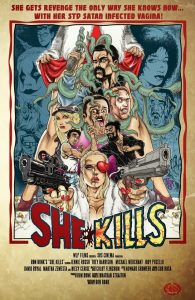 Exploitation throwback revenger She Kills now has a trailer and, well, it’s something you’re gonna want to see.

The film comes from the twisted mind of Ron Bonk, who has been writing and directing low-budget horror flicks (with telling titles such as Ms. Cannibal Holocaust and Inbred Redneck Alien Abduction) since the early ‘90s, and penned last year’s Night of Something Strange. It stars Jennie Russo, Trey Harrison, Michael Merchant, Jody Pucello and David Royal, all of whom have previous with Bonk.

Below is the official synopsis, which it would be wise to read before braving the trailer:
Sadie’s life is destroyed when a vicious gang called “The Touchers” targets her for their sadistic fantasies after witnessing her sexy but innocent naked frolicking in a nearby field. On her wedding night they attack her and her husband, Edward, brutalizing both of them. But during the attack the virgin bride discovers a dangerous secret about her body – she is cursed with the legendary “Fire Crotch,” a condition where Satan has laid claim to her vagina. After visiting her fortune teller friend Casparella, a space exorcism is attempted on her meat flaps, but it only ends up unlocking secret hidden powers inside her. Her hatchet wound becomes lethal, her most deadly weapon in her thirst for revenge against The Touchers and her fight against lustful men everywhere! 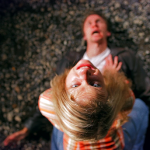 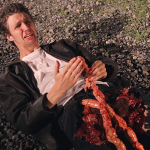