Death to false metal! Deathgasm 2 is on its way 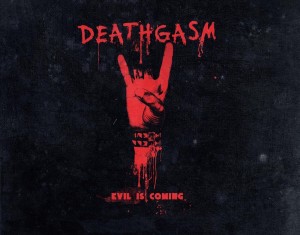 Jason Lei Howden’s Deathgasm was one of last year’s most talked-about films on the horror festival circuit. The tale of metal-lovin’ teenage outcast Brodie and a mysterious piece of sheet music that summons a demonic evil won the hearts of audiences with its cocktail of goofy comedy, outlandish gore and HEAVY-FUKKIN-METAL (‘cause lower case is for pussies).

The Kiwi director made no secret from the start of his desire to up the ante with a sequel, and it looks like things are well underway. Howden recently posted a picture on his Instagram account of the title page of a completed script, entitled Deathgasm Part 2: Goremageddon, which he promises will live up to the name.

“So I just finished this,” Howden wrote. “There is literally more gore in the first 10 minutes than the entire first Deathgasm. If you kinda liked the first, this will make your head implode. If you thought the first Deathgasm was puerile, juvenile and dumb, then Goremageddon will melt your face off and force you to barricade yourself inside, safe with some Terrence Malick and Coldplay.”

Deathgasm was released on UK DVD and blu-ray this week. If you haven’t seen it, don’t wait for  further recommendation. Head over to an independent retailer and buy it now.