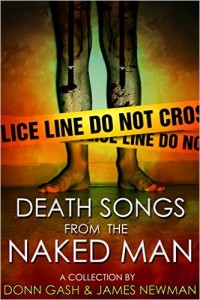 Death Songs from the Naked Man is a short story collection from Donn Gash and James Newman. The first story is the title story and tells of a bunch of shoppers in a shop ‘n’ go about to get a pleasant surprise when a naked man walks in holding a gun. Shits about to get real when a guy pulls in for petrol and his head meets Mr Bullet.

“Tubby went down like he suddenly remembered an urgent appointment with the sidewalk. One of his legs worked like he was trying to kick-start a motor-bike.”

Now it’s just a matter of counting bullets, how many does that fucker hold, six or seven? Next up is Donn Gash with Hot August Night and Bert, a truck driver, not the most attractive guy on the planet it has to be said. So you might think somethings not quite right when a hot looking red head offers him the night of his life in the hotel across the way. Hopefully his fruit of the looms are in a suitable state for a night of passion.

The third story is Gun Therapy where needs must on the Rocky path of marriage and then the excellent Revenge Flick by James Newman, where every man’s worst nightmare becomes real for the man with no balls. So let’s examine the film business and find out how a man with all the right bits can suddenly become the man with no balls. Join him on his journey to find that asshole, the one who had ruined his life, the Man Who Makes Movies.

All told some really well written stories by James Newman and Donn Gash, my favourite was Revenge Flick, you seriously can’t help but feel for this guy and while you’re at it, give ’em a feel, just check they’re still there because this guy, he can’t, poor bastard.