With the year’s most exciting reboot, Roger Corman’s Death Race 2050 released this month, this deliriously excessive red band trailer has been unleashed.

Produced by legendary ‘King of the Bs’ and Academy Award winner Corman – who turned 90 last year – Death Race 2050 comes more than 40 years since cult classic Death Race 2000, which starred David Carradine, Sylvester Stallone and a host of weaponised cars ploughing their way through the general populace, and is one of the most enduringly popular of Corman’s productions. Eschewing the gritty, grizzled po-facedness of the Jason Statham-starring 2008 reimagining, the film instead recaptures the original’s sense of gleeful mischief and Hot Wheels craziness, with colourful, over-the-top characters and B-movie excess, while adding a bitter satirical punch.

Here’s the official word:
Legendary filmmaking icon, Roger Corman, is back with his most outrageous film yet in this sensational, action-packed and darkly humorous reboot of the original Death Race 2000! It’s the year 2050 and America is controlled by an all-powerful corporate government ruled by The Chairman (Malcolm McDowell). The masses have been brainwashed with violent virtual-reality entertainment. The event of the year is the Death Race, in which a motley crew of violent drivers compete in a cross-country road race, scoring points for shamelessly running people over and driving each other off the road. The reigning champion and fan favourite, Frankenstein (Manu Bennett), who’s half-man half-machine, wants to take the crown, but his rebel spy co-pilot threatens his legacy. 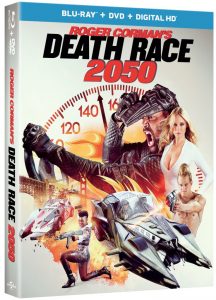 Partnering high-octane action with sharp and timely political satire (McDowell’s line about his hair at the end of the trailer tells us exactly who he represents), Roger Corman’s Death Race 2050 is released on DVD, Digital HD and a blu-ray combo pack on January 17th, through Universal Pictures Home Entertainment.