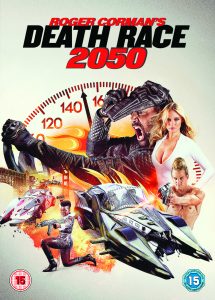 One can’t help wondering why a man of ninety is still producing material of the calibre (and I use that word in its loosest sense) of the latest entry in his infamous Death Race film series. Then again producer extraordinaire Roger Corman – king of the Hollywood ‘B’ movie – was never a man bound by convention.

It’s the year 2050 and any remaining semblance of civility or humanity in the world has all but disappeared. In America – the country which, as always, appears to have won the race for world dominance – the population has become a homogeneous mass of couch potatoes, interacting with the world outside by means of virtual reality. The most popular show on TV is Death Race – a gladiatorial free for all car race, played out by various bizarre contestants who drive cross country in an array of souped-up, death dealing, customised automobiles, in a contest where death is all that counts. Let the games begin!

From the moment veteran British actor Malcolm McDowell appears on screen as the ‘Chairman’ – a pseudo ‘Trump’ like presidential figure who controls the Death Race and manipulates its outcome to his own twisted ends – you know that subtlety is not the aim of this carnage ridden mayhem. In fact, on reflection, it’s hard to pinpoint exactly what Corman and director / writer G. J. Echternkamp had in mind when they came up with the premise for Death Race 2050. Like an ‘X’ rated version of the kids cartoon Wacky Races, the film seems to lack any real purpose, other than as a showcase for the contestants – with such outlandish names as Jed Perfectus and Frankenstein – to use any means to win the race, from diverting their adversaries onto dead end detours to straightforward roadkill.

Ultimately it is the overriding cartoon quality of the proceedings which proves the film’s sole saving grace. The disturbingly graphic carnage which follows in the wake of these spaced out road hogs, is softened only by the fact that everything, from the storyline and acting to the sets, costumes and SFX, are so fake that it’s impossible to take any of it seriously.

Looking at Corman’s IMDB entry you realise this guy has no intention of retiring gracefully into the California sunset – he’s listed as executive producer of at least two horror offerings slated for production in the near future. You can only hope that they are better than Death Race 2050, as it would be a shame if this twaddle proved the swan song of the once talented and trailblazing filmmaker. 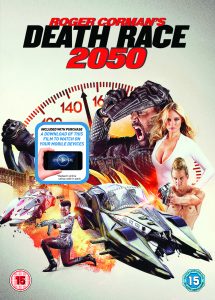 Extras:
If you decide to watch this DVD release, you might be best advised to skip the main feature and go straight to the extras which accompany Death Race 2050. As well as the usual deleted scenes and making of documentary which includes interviews with the film’s cast and crew, the highlight of the package is ‘Cast Car Tours’. With each of Death Race’s contestants giving you an under-the-bonnet guide of their beloved roadsters, this featurette is the clear winner in a release which otherwise fails to fire on all cylinders.