Happy Death Day was one of the surprising great horror films of last year and it wasn’t long before there were talks of a sequel. Titled Happy Death Day 2U – which I think is inspired – we now have a second poster for the film. Check it out below. 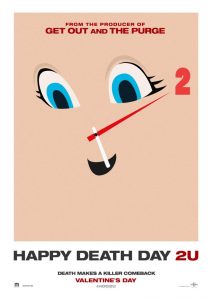 It’s not the best looking of posters, but it does encompass all the film needs to showcase; the idea of death returning, a clock symbolising the repetition of the day and that creepy mask that was present in the first film.

Christopher Langdon returns to write and direct the film which will again star Jessica Rothe as Tree Gelbman. Surely she can’t die again and again, again? We’ll have to see when Happy Death Day 2U is released on 14th February 2019.