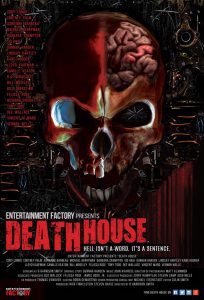 Well, it’s been a long wait but, after months of relative silence on the film, a release date has finally been announced for the hotly-anticipated horror icon-a-thon Death House. Director Harrison Smith (who also wrote the film with the late Gunnar Hansen) revealed through a live stream on Sunday that the film will be released on January 26th, 2018, in Regal Cinemas across the US.

Synopsis:
Two federal agents fight their way through nine levels of Hell inside a secret prison known as the Death House. A facility-wide prison break turns their flight into a tour of horrors as they push toward the ultimate evil housed in the lowest depths of the earth.

With Death House arriving a year later than originally planned, it’s something of a relief to have a date locked. While international release dates are yet to be confirmed however, it’s good to know the film is finally on its way.