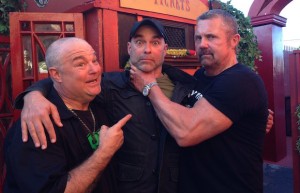 Last week we posted about Death House, the film that has nearly all your favourite horror legends in one place. It almost seemed too good to be true, and it kind of was as director Harrison Smith has stated that some of the information supplied on iMDb was out of date and inaccurate.

Smith recently took to the net in an effort to get the facts straight and to confirm just what the film really is about.

He explained that his script is a rewritten version of a script Gunnar Hansen (Texas Chainsaw Massacre) wrote a few years ago, but his version is quite different and is more like “Assault on Precint 13 meets Jurassic Park without the dinosaurs.” Smith said that most of his inspiration came from Silence of the Lambs, The Wizard of Oz, Alice in Wonderland and Divine Comedy.

Smith understands that with a cast that boasts Robert Englund and many more there comes scepticism and he said it is “…not a gimmick film of “hey look it’s….!” throughout.” He added“…we are making a solid horror piece…dark, nasty and gore soaked. It will not be satire or tongue in cheek.”

Finally, Smith stated this: “I think I delivered a powerhouse horror script and it will be kickass horror film.”