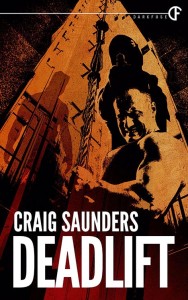 Deadlift is a weightlifting term that refers to the action of lifting a weight from the floor to a standing position, gripping a bar.

That’s the opening line from this excellent novella from American publisher Darkfuse and British author Craig Saunders but don’t fear, there’s no sweaty participants labouring in a gym in this story, in fact the only weightlifting done is when David Lowe, a mountain of a man, grasps a severed elevator cable and effectively becomes the only thing preventing an immediate and catastrophic plummet to the ground floor.

Why? Because the woman he loves is in the elevator and David Lowe has paid someone to kill his cheating spouse but he’s had a change of heart, one that might just be a little too late. And the impossible task of holding an elevator weighing in at around half a tonne, just got that little bit harder when someone puts a gun to his head.

An added ingredient in the mix is the ‘other man’ a crazed serial killer driven by an ancient artefact, one that rules his mind and he’s about to meet Freya Lowe, wife of the man holding the elevator, who is fuelled by love, a massive dose of adrenalin and about to run out of time.

This is a completely absorbing plot, sounds simple but there’s a few more things going on, and the way Craig Saunders tells this story is a revelation. Deadlift is a multiple perspective, multiple timeline story that starts somewhere in the middle, immediately jumps back to the start and then interchanges between the two to get to the end, totally riveting, I was gripped by this novella from start to finish and writing this review, makes me want to read it again. I can’t recommend this highly enough, released in 2014 and by far the best novella of the year.