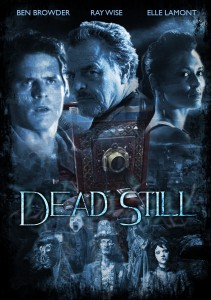 Synopsis:
Upon the death of his great grandfather, Brandon Davis a wedding photographer inherits an antique camera famous for taking Victorian death photography. After photographing his subjects they start to die from horrible, bizarre deaths.

Japan is positively one of the finest exporters of supernatural movies on the planet. Its films are such rare breeds that push the boundaries in terms of quality, creativity and consummate creepiness. There’s no doubting writer/director Philip Adrian Booth’s unquestionable penchant for Asian horror and his latest film, Dead Still can best be described as a creation of Frankenstein proportions: a patchwork quilt sewn together from some of Japan’s finest materials ranging from Ringu through to Shutter. Despite paying homage to such Asian classics, Dead Still’s excessive predilection for poorly-executed bloodletting and shudder-free scares doesn’t make for the prettiest of portaits.

Whilst the premise sounded like it might just have promise, the stock script and acting that’s even stiffer than the film’s cadavers puts to bed any chance of the audience warming to the protagonists. For such a seasoned actor as Ben Browder it is beyond me how all his lines came out so wrong, but then again it’s hard to buy into someone so impervious to all the supernatural shenanigans going on around him. Then there are the two female co-stars who are both just as execrable as each other and you’ll be itching so see their death portrait negatives developed just as much as I was. Finally we get Gavin Casalegno, who plays Browder’s mute son Bobby, with no real explanation as to why he’s giving us the silent treatment. Ultimately, his silence is used so as to implement a late game changer that is so exorbitant it summons a raucous snicker whilst I’m 99% sure the filmmakers didn’t have that effect in mind.

I’ve always been a patsy for Ray Wise, even when he dabbled in B-movie fare; Mike Mendez’ recent creature feature, Big Ass Spider being a fine example. The same, sadly, cannot be said for Wise’s decision to portray the flamboyant Victorian death portrait photographer, Wenton Davis, trapped inside an antique camera. As delectable as it was to see Wise tinkering around with all manner of macabre contraptions whilst chewing up the scenery with a plethora of portrait posing cadavers, his schizoid shutterbug character does everything but instil any form of fear.

As I said, the filmmakers clearly wanted to keep the gorehounds happy and the film does provide the odd graphic burst of blood and guts. Whilst things turn pretty damned gnarly in places, these scenes are marred by two bizarre directorial/editing decisions. Firstly, the editor overly-mutilates each and every mutilation scene to leave the audience with just snippet glimpses of all the slaughter; most likely to dissimulate any budget shortcomings. Secondly, and most likely another by-product of said shoestring budget, the goriest death scene gets milked as if it were the last cow on earth and is scorched onto the backs of our retinas through incessant flashbacks.
As with any supernatural tale you have to leave your imagination behind, and I did, but far too much of the film struck excessively farcical notes and, as I said before, Philip Adrian Booth’s tongue was most likely in a completely different postcode to that of his cheek. When an iDevice began finishing people’s sentences for them that was the point of no return from my full on cringe attack.

The film’s biggest belly flop comes when the evil camera consumes both son and father, trapping them in what is known as the “negative” world. This new setting shares much in common with Freddy Kreuger’s boiler-room and the plot eerily starts to run along the lines of A Nightmare on Elm Street 3: Dream Warriors with the father and son facing Wise and his ensemble of trapped cadavers. Here the film could have – and should have – ramped up the fear factor but, with the cadavers sporting costumes that make Van Damme’s Predator lobster suit more frightening by comparison, the whole thing culminates in a languid and tame experience.

Had Dead Still been tackled from a different perspective with an eerier setting, creepier characters and a much more disciplined script it could have rekindled at least some of the fears found in the films it unabashedly attempts to mimic.