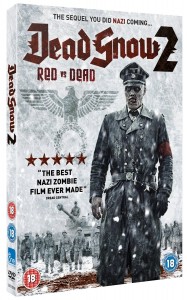 Synopsis:
The bloodthirsty Nazi zombie battalion is back with plans for world domination, in this gory follow up to Tommy Wirkola’s cult classic original.

Having survived a brutal onslaught at the hands of a troop of undead, flesh-devouring fascists, Martin (played by Vegar Hoel) might be forgiven for thinking things couldn’t get much worse. However, as Dead Snow 2 shows, the nightmare has only just begun.

After a chaotic getaway, Martin awakens in hospital to find himself handcuffed to a bed and accused of carrying out the brutal murders that wiped out his group of friends and girlfriend Hanna (played in the first movie by Charlotte Frogner). Not only that; a well-meaning surgeon has unwittingly re-attached Nazi zombie commandant Herzog’s arm to Martin’s severed stump.

Martin escapes and goes on a mission to destroy the undead army once and for all, enlisting the help of a trio of American geeks who call themselves the ‘Zombie Squad’. Together, they discover the burial ground of a troop of undead Soviet soldiers and, harnessing the power of Martin’s newly-attached limb, attempt to raise the zombie Commies from the afterlife and quash Herzog’s battalion once and for all…

Dead Snow 2 is notable mostly for its comic and absurdly OTT use of gore and violence. Limbs, guts, intestines and brains abound as the film takes the term ‘splatter’ to a whole new level. But rather than creating a horrifically gruesome and downbeat picture, the comic elements in the film make for an intensely enjoyable popcorn gore-fest.

Comic relief is awash in Vegar Hoel’s depiction of Martin as an escaped fugitive coming to terms with the fact that his new arm appears to have taken on a violent life of its own. Further humour is thrown into the mix via the ‘Zombie Squad’, which in reality is a group of horror geeks who have watched one too many George Romero films for their own good. Yet, despite their apparent ineptitude, they make quite a formidable force once they join forces with Martin and attempt to take down the platoon of zombie footsoldiers marching across Norway.

Talking of marching troops, Dead Snow 2 makes apt use of the natural beauty of the Norwegian landscape, as majestic plains and marshes become gory battlegrounds, while the simplicity of Scandinavian architecture and interior design gives the picture an art-house quality. In fact, it is easy to see how, in the hands of a British or American indie production, the film might have flopped and been too reliant on gore or overworked characters. As it is, the Norwegian minimalist approach works to the film’s advantage; both in terms of creating a pleasing aesthetic and in producing a bleak and atmospheric picture.

The zombies, needless to say, are not typical, Romero-esque mindless corpses, as they are able to talk, follow orders, operate machinery and handle weapons. This will disappoint anyone looking for something akin to the slow-burning claustrophobia of Dawn Of The Dead (1978), as in reality Dead Snow 2 bears more of a resemblance to Sam Raimi’s Evil Dead 2 and Army Of Darkness (not least in Martin’s transplanted, possessed limb).

This latest release from Entertainment One is a decent print that helps the majestic scenery and cinematography really come alive. While the extra features might be a bit sparse, they are certainly better than the usual trailer reels that are now so commonplace on DVD menu screens. The first is a short showreel of the impressive VFX work on show in Dead Snow 2, while the second is a moving and humerous short film by Thomas Lunde called ‘The Arm’. While wholly unrelated to the main feature, it provides a bit of contemporary contextualisation of modern Norwegian filmmaking.

Entertainment One has made a name for itself in independent film distribution, and Dead Snow 2 is no exception. While it contains various exploitative elements like Nazis, zombies and extreme violence, which on paper make it sound like something from the mind of Jess Franco, the film is a beautifully crafted horror spectacular that strikes a perfect balance between gore and comedy. Something of a late show, Dead Snow 2 has quickly become a last minute run-in for horror film of 2014.