Synopsis:
After a family flee a New Zealand farmhouse in the night, claiming they are being terrorised by a paranormal entity, two investigators and a psychic stake out the house for a few nights to find out exactly what is going bump in the night. 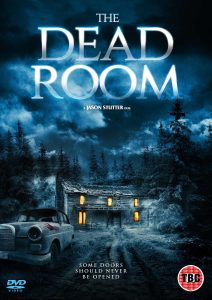 New Zealand has been producing some fantastic entries into the horror-comedy genre in recent years, with movies like What We Do in the Shadows and Housebound pleasing audiences and critics alike in spite of their low budgets. So I was genuinely intrigued to see what a straight-faced fully fledged horror flick from the country could offer when I came across director Jason Stutter’s The Dead Room, released on DVD in the UK last month. Unfortunately, with bland characters and a script which is uninspired and flat, this one is about as lively as its title suggests.

Hobbit alumni Jeffrey Thomas and Jed Brophy (who you might also remember as Void in Peter Jackson’s Braindead) play ghost hunters Scott and Liam, tasked with investigating claims of an aggressive entity haunting a secluded house. Scott is the sceptic, Liam is the tech nerd, and they’ve brought in young psychic Holly (Laura Peterson) to complete the clichéd character trifecta. With their equipment set up and the spirit asked politely if it wants to communicate with them, the team – and the audience – hunker down to see if anything interesting will happen.

I’m a bit of a sucker for movies about hauntings, despite how often they disappoint me. Perhaps it just comes with the territory of working as a ghost tour guide for as many years as I have; when every staff night out inevitably dissolves into listening to your usually sceptical colleagues drunkenly telling ghost stories, you can’t help but grow to love them. As such, I think I gave The Dead Room more of a chance than the average viewer might, because the zombie-shuffle pacing will certainly put some people to sleep. Its first act is your standard fodder and more than a little dull, but I stuck with it, sure that it was building up to something. Sadly, despite regurgitating elements from just about every paranormal movie you can think of as it staggers towards its limp and predictable climax, The Dead Room never manages to be scary or interesting in the slightest. Doors bang, light fixtures sway, and our resident psychic tells us how scary a ghost is that we never see. Even watching with the lights out and the wind howling outside my window couldn’t make this tired material remotely frightening.

Credit where credit is due, there are a few atmospheric shots of the house’s interior and the camerawork is nice – though it speaks volumes to how boring the film was that the camerawork stood out to me at all. The acting is also fine; an early scene involving Brophy’s Liam reading a bedtime story to his child over Skype was a sweet moment of character building in a script otherwise utterly devoid of it. We might as well be watching cardboard cut outs being pushed from room to room for all the personality these guys have beyond their status as sceptic or believer. Their motives are horribly confused, with someone excited to record real ghost activity in one scene wanting to leave in the next. A rivalry between Scott and Holly felt as though it might have been going somewhere interesting, but amounted to nothing. The real twist becomes apparent long before the film shows you its cards, and its execution is about as lacklustre as everything else. It can barely be said to end on a whimper, let alone a bang. 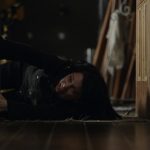 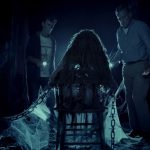 You can make the argument that it is genre oversaturation causing audiences to become increasingly indifferent to movies of this type, but even a genre driven so thoroughly into the ground as this one can be brought back to life by the right director. This summer’s big paranormal hit The Conjuring 2 is a great example of a premise we’ve seen done a thousand times made fresh and truly chilling by someone who knows how to execute a proper scare – and sure, a movie like that has a lot of money behind it, but James Wan has proven in the past that he can make the most out of a small budget, as he did with Saw. Speaking of budgets, fellow kiwi flick Housebound was made for a miniscule $350,000 (NZD) and managed to turn a story which looks ridiculous on paper into something fantastic, funny and spooky, all thanks to a cast and crew who put their all into the project. There’s no excuse for laziness, and I’m sad to say that The Dead Room just feels lazy. The director expects you to be scared by a door opening on its own. Perhaps ten years ago, but The Dead Room was already long dead on arrival.