Dead Man’s Hand (2007), a film that is also known as The Haunted Casino and also Casino of the Damned in some regions, is a casino-themed haunted house movie. It tells the story of Matthew Dragna, who inherits an old casino from an uncle that recently passed away.

After learning of his unexpected windfall, Matthew, his long-term girlfriend JJ and some of his friends head to his new asset to check it out. Of course, being a typical horror film, the casino is run down, filled with dust and cobwebs, and lacks working electricity.

It has apparently been left derelict for a long time, and the mechanical one-armed bandit slot machines that are covered in layers of unconvincing dust have been placed front and centre of early scenes to show this.

However, they soon uncover newspaper articles that reveal that, coincidentally, Matthew had inherited the casino on the anniversary of a massacre that had taken place there several years prior. This resulted in the deaths of five people, including a big-time mob boss called Roy “The Word” Donahue. They also learn that Matthew’s uncle was behind the gangster’s early demise, and that Donahue’s ghost roamed the haunted casino, along with the others that died that night.

Predictably, the ghost is out for revenge and since Matthew is the only surviving relative of his uncle, he becomes the target for Donahue’s retribution.

Unconvincing
The horror movie genre is no stranger to low-budget productions, but this doesn’t always mean poor quality. Unfortunately, Dead Man’s Hand is the type of cheaply made movie that feels like it was put together on a shoestring.

For a horror movie, it lacks much actual horror. It has a 75-minute run time, but little happens for almost an hour, leaving you with just over 15 minutes for some poorly executed action.

The director, Charles Band, is known for his low-budget horror films, but Dead Man’s Hand sets a new low.

In addition to a lack of scenes that are actually scary, Dead Man’s Hand contains endless casino-based puns that are neither funny nor coherent. In a scene where one of the characters is playing roulette, one of the creatures cuts off his hand and says “you’ve got a dead man’s hand”.

The pun doesn’t work though, because, in all its versions roulette is a wheel-based game that doesn’t involve cards. Instead, the dealer spins a wheel with 37 or 38 differently numbered pockets and a ball; the players must then predict which pocket the ball will land in. The term “dead man’s hand” comes from poker, though it was mostly used during the 19th and early 20th centuries and is seldom heard at poker tables today.

Cast
The cast of Dead Man’s Hand is mostly made up of actors you probably haven’t seen in much else. Matthew is played by Scott Whyte, who has spent much of the last few years playing extras and voicing characters in video games.

Meanwhile, his girlfriend, JJ, is played by Robin Sydney who has mostly featured in other Charles Band movies, including the poorly received Barbie & Kendra Save the Tiger King (2020) and Puppet Master: Axis Termination (2017).

Veterans Michael Berryman and Sid Haig make an appearance, playing the ghosts of Donahue and his sidekick Gil Wachetta. However, their screentime is very limited and they don’t add much to the film. Haig also appears to be reading cue cards in certain scenes too, which also detracts from the already unbelievable premise.

Writing
The cast can’t be entirely blamed for the poor movie though. As is common with Charles Band movies, the characters lack any depth which makes them hard to empathise with or root for.

Band movies are known for their cheese and crude jokes, and Dead Man’s Hand certainly has plenty of this. However, while these can give low-budget horror films a certain charm, they’re best used sparingly or else you risk falling foul of the laws of diminishing returns. Unfortunately, Dead Man’s Hand does feel like it stepped too far over the line of acceptable cheesiness. 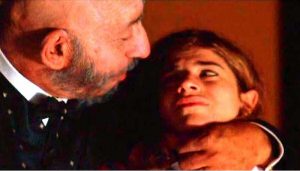 Should You Watch Dead Man’s Hand?
Dead Man’s Hand is a straight-to-DVD film for a reason. It’s been included in several IMDb lists with titles like “The worst movies I’ve ever seen” and “The Worst 25 Movies of 2007”. It had a budget of just $200,000 and has a Rotten Tomatoes audience score of just 23%. With that said, it may still be worth watching at least once. Like many other cheesy horror productions, it’s a movie that you can watch with a friend and laugh at. It may be so bad that it’s almost good.