Dead is Better in the Poster for Pet Sematary

The first poster has been released for the upcoming adaptation of Stephen King’s most terrifying novel Pet Sematary. The poster is a sinister one, focusing on the bones of animals buried in the ground of the cemetery. 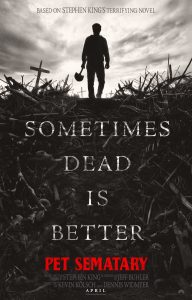