Synopsis:
In a post-apocalyptic near-future, Crabs (Ned Manning) and Carmen (Natalie McCurry), a couple of teenagers, are trapped in a drive-in filled with societal rejects that survive on junk food, drugs, movies and music. 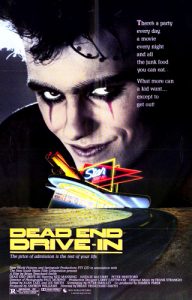 I love 80s’ movies depictions of post-apocalyptic futures. Everyone turns into a punk with spiked up, dyed hair and flashy make-up. Cars and walls are covered in graffiti and fires burn randomly in the rubbish-filled streets that are dominated by groups of people under the age of 25. It’s a thing of beauty. Dead End Drive-In boasts an impressive attention to detail in its creation of a dangerous world without rules and regulations; where the futuristic punks are left to roam as they please against a backdrop of neon colours that are splashed across costuming, the buildings and the bright lighting. It’s an explosion of pinks, blues, reds and greens that emphasis the lack of societal control that has left the world in a state of utter mayhem. For where it lacks in story, Dead End Drive-In makes up for in its production that mimics the insanity seen in Mad Max’s world that, too, is a wasteland overrun by utter lunatics. Arguably, this world is an even madder one; one that saw Mad Max and pondered, “what if we go further?” and did a damn good job in doing so. The characters at the Star Drive-In are relentlessly loony; only caring for drugs and a good time, they see no reason to leave the place they are trapped, because what does the rest of the world have to offer them? As a comment on the degradation of society, Dead End Drive-In is, perhaps, more relevant today than it ever was.

Dead End Drive-In’s production design may be commendable, but it does seriously lack in terms of narrative. Once the characters reach the Drive-In, very little happens and the scenes become various montages that serve very little purpose. It’s Ozploitation through and through with its cool, nu-wave soundtrack and shameless nudity, but a little more depth would have served it well for boosting its social commentary and rendering it more memorable. What began as an interesting introduction into a fascinating world, fast becomes repetitive and dull. There is an unmissable dip in the film’s middle where Crabs and Carmen adjust to their new lives in the drive-in as the film seems to say all it can within the first 45 minutes.  Peaking very early on and promising a strangeness that is never quite seen again hinders the enjoyment of Dead End Drive-In, because it leaves very little new madness or excitement for the second half. 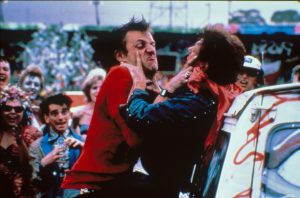 On a purely surface level, there is a lot to love about Dead End Drive-In’s lack of concern with trying to convey anything too serious. Sure, it is easy to read the film as a brazen comment on the place of young people in the 1980s; their lack of place in society rendering them without a future,  unemployment causing them to break-away entirely and to live separate, but together. However, this is a pure showcase of sets, costuming and horrifying hair styles that are dying to be appreciated and it’s impossible not to give the praise where it’s due. It’s a fun romp in a quite crazy land, but very few specific moments in the film will stay with you. You’ll probably remember the characters’ sudden, bizarre racist mentality that leads them to blame Australia’s Asians for their problems, but rather than add a new layer to these characters, it feels shoe-horned in to fill a gap in the film’s lack of direction. The has opinions on politics, gender and age, so of course it must add race in to the mix. Nonetheless, you’ll still rather retain the memory of the visuals; a spray-painted dog, a man pointlessly blow-torching a lamp post and the loony cars with their missing wheels, bonnets and smashed windows.

It’s ridiculous, silly and sometimes outrageous, but Dead End Drive-In is, ultimately, a complete blast that is impossibly watchable and possibly quite brilliant. With a promising opening and a flying finale, it’s a shame that the middle does not deliver the goods, but there is still enough in its brash and bold production to keep you hooked until Lisa Edwards sings about Playing With Fire. 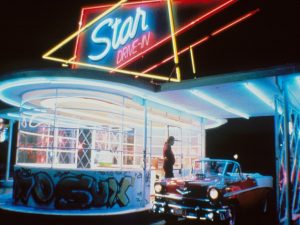 The special features on the Blu-ray disc are great. The first is a documentary called The Stuntmen, which delves into the lives of stuntmen from Mad Max, Cleopatra and others from director Brian Trenchard-Smith. It’s a little dated now, but it’s a lot of fun to see how they used to execute admittedly remarkable stunts in the ’70s and ’80s. It’s equally as dramatic as it is factual, so well worth your time if you have an hour to spare.

Then we have Hospitals Don’t Burn Down; an award-winning short film from Trenchard-Smith that follows the events that ensue when a fire breaks out in a hospital. It’s a hard-hitting short and appropriately realistic as it shows the bravery of various people in the hospital, but also the harsh reality that some people won’t make it out. Probably not the most cheery of films, but a great one nonetheless.

The rest of the features include a Vladimir Cherepanoff gallery, a theatrical trailer and a commentary from the film’s director himself. So, in short, Dead End Drive-In has a host of epic features that go beyond the film itself. Super!