Dazzling Poster for The House with a Clock in its Walls

Nope, it’s not a new poster for the new Goosebumps movie; it’s got Jack Black on it! A brand new IMAX poster has been released for The House with a Click in its Walls and it shows the film’s cast and the dazzling magic that features in the family-friendly horror flick. 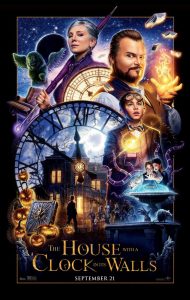 The film is an adaptation of the 1973 novel by John Bellairs, which tells the story of a recently orphaned 10-year-old boy who, after going to live with his Uncle, discovers a world of hidden passageways, magic and danger in the old house. The film was scripted by Eric Kripke, who created long-running TV series Supernatural.

The House with a Click in its Walls stars Jack Black and Cate Blanchett, as well as Kyle MacLachlan, Colleen Camp, Renée Elise Goldsberry, Vanessa Anne Williams. Be sure to catch the film when it is released on 21st September.