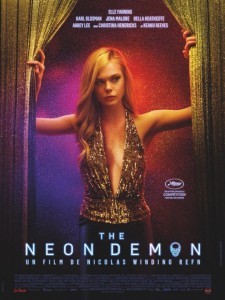 A dazzling new poster has been unveiled for The Neon Demon and it’s so sparkly it looks as though you can actually feel the texture. It’s another stunning piece of marketing for Nicolas Winding Refn’s colourful addition to the horror genre and we hope that the film itself will live up the beautiful posters and trailers that we’ve seen.

The Neon Demon stars Elle Fanning as an aspiring model called Jesse who gets caught up in the gorgeous, but dangerous, world of beauty, fame and celebrity. The film additionally stars Jena Maone, Abbey Lee, Keanu Reeves and Christina Hendricks.

The Neon Demon will be released courtesy of Amazon Studios on 8th July in the UK. The release date is currently slated for June 2016 in the USA.