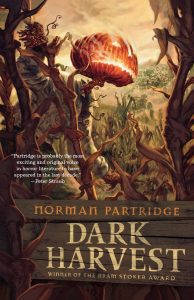 David Slade (Hannibal, 30 Days of Night, Hard Candy) is directing an adaptation of Norman Patridge’s Dark Harvest, and the project has officially found a home at MGM.

Michael Gilio is writing the adaptation of the horror novel, which won the 2006 Bram Stoker Award for Best Long Fiction. The story is set in a small Midwestern town on Halloween, 1963. As part of a strange annual ritual, the town’s teenage boys must face off against an evil pumpkin-headed, butcher’s knife-wielding creature named October Boy. Killing October Boy will allow you to escape the dead-end town… but only if it doesn’t kill you first.

No timeline has been set for the project just yet. We’ll bring you updates as we hear them.