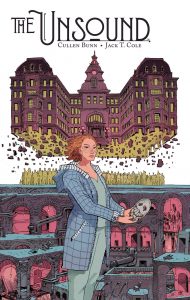 Netflix has landed the rights to a feature film adaptation of the graphic horror novel The Unsound, and David F. Sandberg (Lights Out, Annabelle: Creation) is on board to direct. Skylar James will pen the script.

The Unsound was written by Cullen Bunn and illustrated by Jack T. Cole. It centres around Ashli, a nurse whose first day at Saint Cascia Psychiatric Hospital turns into a nightmare when a bloody riot breaks out. As she flees into the bowels of the hospital, Ashli discovers a hellish world filled with lunatics and monsters—and a secret history of black magic and horrifying scientific experiments.