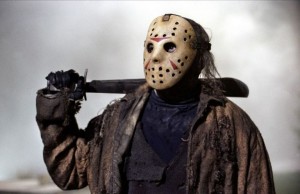 While the time has perhaps passed when Jason should have hung up his bloodied hockey mask for good, most fans would love to see him sent off in the style he deserves. And y’know, it’s seldom anything but a joy to see the iconic villain slashing his way across screens. Or at least it was, until that giant of lunkhead cinema Michael Bay got his artless mitts on the franchise. But hey, that’s a rant for another time.

After being attached to Paramount’s Friday reboot for some time, director David Bruckner is no longer working on the project, which is a shame, given his stellar work directing The Signal and V/H/S segment Amateur Night. Bruckner has opened up to Fangoria about the direction in which he wanted to take the film.

“When I came on board that project, Paramount was exploring whether or not they could do a found-footage Friday, and they brought me in to crack it,” the director explained. “I had some very specific ideas; if we were going to do that, I felt it needed to be single-camera. So writers Richard Naing and Ian Goldberg and I set out in earnest to see if there was a movie there. There are certain restrictions to found footage; just the fact that you’re locked into a single perspective almost makes the slasher formula impossible, because characters tend to wander off on their own all the time and get knocked off. Also, part of what defines some of the greatest slashers is the additional perspective. That was a really fun obstacle to tackle, and we ended up structuring it a little bit more like a monster movie. All the mythos surrounding Jason Voorhees opened up a lot of possibilities, and for a moment in time, we had a story that took place in the ’80s, which worked with the found-footage conceit. It was a return to form in a lot of ways, and we really focused on the characters.”

Paramount began to lose faith in the handheld approach however, and hired Nick Antosca (Hannibal) to write the script.

“We were set free from that mandate,” Bruckner recalls, “and did a draft that was not found-footage. We were allowed to truly explore what the film could be as a proper ’80s reboot—what that would look like. My take on it was that I wanted to do Dazed and Confused meets Jason Voorhees, a genuine last-day-of-school coming-of-age story. Nick wrote a great draft, and we really wanted to see that movie come to life. It was a very exciting process for me.”

Whatever the reasons for Bruckner’s departure, a rewrite is now in the hands of Aaron Guzikowski (Prisoners). Whether or not any semblance of Bruckner’s idea (which drips with potential) will be rescued remains to be seen.

“I think the studio is exploring some other options right now; we’ll see what happens,” Bruckner says. “I spent a lot of time with Jason Voorhees, and had a lot of ideas what to do with him.”