The puzzle box is opening once again! David Bruckner (The Night House, The Ritual, Southbound) has been tapped to helm Spyglass Media’s upcoming remake of Hellraiser, Clive Barker’s classic horror film based on his own novella, The Hellbound Heart. 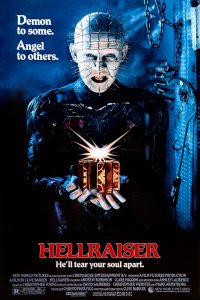 In the 1987 original, a man opens the doorway to another dimension by solving a puzzle box, only for leather-clad creatures known as Cenobites to tear him apart. After a drop of blood resurrects him, he recruits an old flame to help him restore his body. But the Cenobites aren’t willing to let him go that easily…

Ben Collins and Luke Piotrowski (the writing team behind The Night House) are penning the remake’s screenplay, with David Goyer working on the story. Goyer will also produce alongside Keith Levine.

What sights do Bruckner and Spyglass Media have to show us? And will this new re-imagining be sweet suffering—or just plain hell?