Plenty of directors have tried their hand at a Hellraiser film over the years, from future horror heavy-hitter Scott Derrickson to the always popular “Alan Smithee.” The latest to summon the Cenobites is David Bruckner, and if that name sounds familiar, it should. Bruckner’s previous films include The Night House, The Ritual, and the superb V/H/S segment “Amateur Night,” so it’s safe to say the franchise is in good hands.

In the new instalment, simply titled Hellraiser, a young woman struggling with addiction comes into possession of an ancient puzzle box, unaware that its purpose is to summon the Cenobites, a group of sadistic supernatural beings from another dimension. That group is, of course, led by Pinhead, our beloved Hell Priest, played this time around by Sense8 actress Jamie Clayton.

To celebrate the release of Hellraiser on Hulu on October 7th, we summoned Bruckner and Clayton for an interview at this year’s Fantastic Fest in Austin to talk puzzle boxes, pins, and resurrecting an iconic franchise.

SCREAM: What was your first introduction to the Hellraiser franchise?

DAVID BRUCKNER: Hellraiser 3 was the first one that I discovered. It must have found me the way that movies did in the 90s, and it scared me quite a bit. But I was a late bloomer to horror because I couldn’t handle it when I was young. Hellraiser was something I saw several times as a teenager, and I think every time it grew on me—I got more out of it. Later, I realised it was a masterpiece and something that became, for me, graduate-level horror. I never imagined that I would get to work on a Hellraiser film.

JAMIE CLAYTON: I’ve been familiar with the imagery of the Cenobites since I was a teenager growing up in the 80s. It’s some of the most iconic imagery in the genre. But I’d never seen the film until the night before I auditioned. I watched it to get an idea of the tone of the film and understand what exactly I should be thinking about and doing when I was taping my audition. I had no idea how sexy it was and I was like, “Ohhh, now I get it!” Then I did a little research on Clive and I was like, “All right, this motherfucker is cool. I want to do this.”

Was there ever a moment of “What have I gotten myself into?”

JC: Oh, dozens—but in the best way possible! It was such a ride. Nothing could ever top this. Nothing.

The franchise has a reputation for having a few rushed entries made to keep the rights. David, was there added pressure in knowing you were making the first really intentional Hellraiser film in a couple of decades?

DB: Yeah. Not just because it’s Hellraiser and it’s sacred to horror history and rather revered, but also because I’ve never done an IP before. We were trying to balance the expectations of the fans, because there are a lot of fans that see a lot of different things in Hellraiser, but also allowing ourselves to get lost in it and just follow our own passions and inspirations. That was the interesting line to find.

And Jamie, you had very big shoes—or should that be pins—to step into. How did you approach developing your character and really making it feel like your own?

JC: It was a lot of conversations with David. He was so generous with his time. After I booked the part, we had several Zooms where he introduced me to all of the designs for the Cenobites that Keith Thompson did, which were incredible. They blew my mind and I didn’t know how in the world they were going to execute these designs, but they did so beautifully.

Once I had the life cast and the makeup test and everything, we had lots more conversations via Zoom. He would shoot all night and have one day off a week, and he would schedule a Zoom with me and we would talk for hours. We even had one Zoom all about the shoulders—the placement of the body and the stillness, how I would hold the body.

After we did my first screen test in Serbia, that helped me a lot in understanding what it was going to feel like to stand in the full suit. Then we talked about the voice and about the intentions and what David’s ideas were, his hopes and dreams for how this would come across. We landed on this sort of sensuality—a hunger and a need that she would have for all of these things to be happening around her.

You mentioned the designs of the Cenobites. In the original films, they all wear black leather. David, in your film, the element that connects them is pearl-tipped pins. Where did that idea come from?

DB: The pins are described in “Hellbound Heart” [the Clive Barker novella that first introduced the Cenobites] as being bejewelled, so Keith Thompson’s original designs put white beaded pins into the face. We actually tried a few different things and we started talking about the idea that they would hold the light. They would frame and kind of crown the face, and in moments where the famous dimensional lighting would catch the Priest, it would almost have this holy feeling, but also feel celestial and somewhat cosmic.

That felt really appropriate. That felt like it was coming from a corner of the Barker-verse that we wanted to explore. And the further we got with the designs, Keith started to find that those pins were reproducible and that it could be kind of a texture that appeared on a lot of the Cenobites.

Losing the black leather was a big decision. The designs in the original Hellraiser and beyond are so iconic to me; they’re impossible to beat, but we felt like we had to do something new. We had to find a way to be shocking or beautiful in a way that would catch you off guard. We couldn’t really do that by simply reproducing what had already been there. And it was honestly more in the spirit of the franchise to innovate. 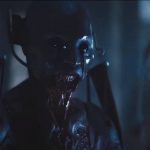 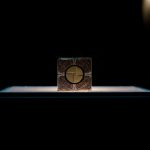 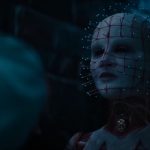 Other than Pinhead, do you have a favourite of the new Cenobites in terms of the designs?

DB: That’s a really tough one. It changes for me quite a bit. I went through a Masque phase. I went through a Gasp phase. The Asphyx is wonderful. I’m very proud of our Chatterer. The Weeper is beautiful. I love them all.

JC: You’re asking him to pick a favourite child! [Laughs] The same thing has happened to me because I would work with them—we’d be in the makeup trailer and I’d have scenes with some of them—and I didn’t work with some of the others, so as I would see them, my admiration was shifting and I was enamoured with different ones at different moments. Selina does such an incredible job as the Gasp, and Yinka as the Weeper doing the thing with the arms is just so genius… I mean, I can’t. How do you pick one?

I wanted to touch on the puzzle box as well, because it operated much more as an actual puzzle than it has in some of the previous films. What kind of conversations went into creating such an intricate prop?

DB: From the moment that I came on board, I was really blown away by how much of a role the box played in the film. That’s the kind of design challenge that just excites me. [The configurations] also feel like chapter headings throughout the film in some way and it’s fun to see a progression. So we knew it was going to be a really big challenge because we were going to have to come up with so many different iterations that still felt appropriate to the puzzle box, but we also wanted to capture the tactile, textural sensation of solving a puzzle.

When we were in the development phase, it was a surprise to discover that Kathrin Eder, our production designer, and Keith Thompson had both been referencing the work of an artist, a video game designer, by the name of Martin Emborg who’s based out of Copenhagen. He had created this game ECHO that had these elaborate Hellraiser-like landscapes. And we kept looking at his work and thought, well, let’s just call him and invite him onto the project. He came on and really dove into the box designs.

The challenge was not just to create all these iterations, but to actually build a solvable puzzle. We get pretty close to describing it in the movie. For fans that are really paying attention, you can kind of follow the trickery of it, how it works—at least how the first puzzle is solved. We were also making sure there was an intuitive, reasonable transformation state between the boxes, so [Emborg] actually built out how those transformations happen in a pretty elaborate way. We were really excited to get it in there.

I’ll end on a fun one: If you were Cenobites, is there a particular look you’d want to go for?

DB: I’ve never thought about this…

David, can you beat that?

DB: No, I don’t know that I can… I’m really taken by the fact that Masque has writing carved into his chest. I love the idea that there’s some doctrine that is embedded in him and I have often found myself wondering what that might say.

Hellraiser arrives on Hulu in the U.S. on October 7th.