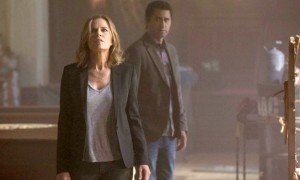 In a recent interview with THR, showrunner Dave Erickson spoke about the upcoming The Walking Dead spin-off show Fear The Walking Dead, which shows the zombie apocalypse from a different point of view.

Erickson spoke about how the show differs from the popular horror show The Walking Dead, who the main characters will be, what the possible future might be and more.

“The goal was to loosely track the period of those four or five weeks that Rick Grimes was in his coma. I wouldn’t say that we end the season at the exact same point where Rick wakes up, but it’ll loosely be in that time frame. Things will have gone very bad by the end of season one.”

How they won’t be going into details about the zombie cause, rather focusing on how certain people and their relationships, have been affected:

“I had a couple of early pitches that touched on what you’re referring to and Robert shut me down. For him, it’s never been about what caused it; it’s always been about the impact it has on people…”

Erickson talks about the main characters and their back stories:

“It’s about a family: Travis (Curtis) just moved in with his girlfriend Madison (Dickens) after they got married. She has two children, one of whom has some issues. Travis has a very pissed-off teenager and an ex-wife. You’re talking about two people who, as the story opens, all they want is to bring their family together under one roof and make everyone whole. The irony for us is that the only thing that helps accomplish that is that the world ends.”

He also talks about where he sees the series going in the future:

“All of the issues that we establish, these are the things that in my head will come to fruition in seasons three, four, five and six.”

Erickson spoke about the CDC point of view and if Dr. Edwin Jenner would possibly make an appearance:

“I won’t say that we would never go there, but as it was scripted originally, that was really a means to writing some connective tissue for the fans. Robert very poignantly said that he likes to avoid the CDC perspective, the FEMA perspective, at least moving forward.”

If any of the character from The Walking Dead would crossover into the spin-off or vice versa:

“I think logistically, it would be very difficult. There’s no plan for a crossover. If that were ever to happen, it would not be for seasons to come, and there’s no current plan to do so. But I do think there’s something compelling and interesting about it, too.”

Where in Los Angeles the show will be set and what areas will be seen:

“Right now, our L.A. skews more East Side. It’s blue collar, it’s closer to downtown. We’re not hitting the landmarks as much. I think there are more opportunities to do so later this season. The goal was to show a very textured, layered, vibrant version of this city.”

Erickson also mentioned that he’ll be focusing more on the conflict within people and their relationships with one another, rather than with people they encounter:

“What’s interesting to me is to try to internalize it as much as possible and create more of a Shane (Jon Bernthal)-Rick dynamic. That’s where I find the most interesting problem and I find things more compelling… we have some ideas that are going to give us, in terms of location and structure, an opportunity to do a movie a season.”

Erickson talking about how many episodes he hopes there will be in the season:

“I think 13 is a great number; 15, 16, it’s really a question of having the time to sit down and make sure we’re not burning story to burn story; that we’re able to build something that’s layered and textured and compelling.”

Starring in the zombie day of reckoning will be Kim Dickens (Gone Girl) as Madison, Cliff Curtis (Missing) as Travis, Frank Dillane (Harry Potter and the Half-Blood Prince) as Nick, Alycia Debnam-Carey (Into the Storm) as Alicia, Elizabeth Rodriguez (Orange is the New Black) as Liza and Mercedes Mason (Quarantine 2: Terminal) as Ofelia.