Originally slated for release on October 13th, Darren Aronofsky’s stealthily produced psychological horror Mother! has been brought forward, as revealed by the trailer which is playing before Dunkirk this weekend. The film will now see big screens on September 15th. 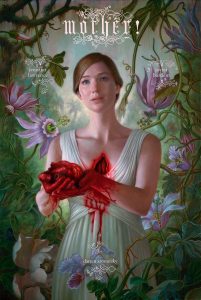 Black Swan director Aronofsky (pictured above) wrote, produced and directed Mother! more or less in secret, with the film becoming a surprise announcement at CinemaCon earlier this year. The reveal was followed in May by this poster which contrasts its horrific image of star Jennifer Lawrence offering up her heart with a traditional, children’s book aesthetic.

In the film, “a couple’s relationship is tested when uninvited guests arrive at their home, disrupting their tranquil existence.”

If you’re planning on seeing Dunkirk this weekend, just remember not to pop to the toilet during the trailers.