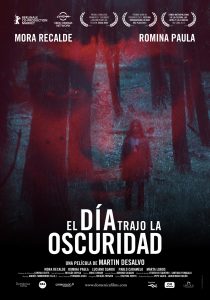 Thirty-something Virginia (Mora Recalde) is left alone in her family’s house while her father tends to his sick niece Julia. As a rabies virus plagues the surrounding area the arrival of her cousin Anabel (Romina Paula) sets a strange set of events in motion as she spends most of the day asleep and disappears at night.

Darkness By Day (El Dia Trajo La Oscuridad) is a flawed, but enjoyable vampiric horror-drama that benefits from its spooky setting of the isolated house and forest, both working as metaphorical extensions of the characters’ struggles. It won’t take long for you to work out the truth of Anabel’s disappearance, with the film’s interest truly being on the impact her arrival has on Virginia. Both women find uneasy solace in their respective “homes”; one running to the forest at night and the other symbolically chained to the house she pretends to be happy in. The film’s location is consistently well-captured to hint at the malevolence that lies beneath, but impressive cinematography is not enough to certify this as something entirely worthwhile.

Darkness By Day also benefits from strong performances by its two female leads, with Recalde and Paula playing their roles with subtlety. They are effortlessly convincing as two women that are living with inner demons and despite the film’s ominous atmospherics, the real mystery lies in what’s hiding in their past. There is an unmissable tension between the two as they share awkward glances and uneasy smiles. When coupled with Anabel’s night-time disappearances and the radio’s coverage of the rabies plague, writer Josefina Trotta crafts a complex and layered story, but the execution on-screen squanders much of its potential.

Darkness By Day falters with its slow-burn deliverance that sees very little happen during the majority of the runtime. Director Martin De Salvo opts for a moody, seductive atmosphere that is shrouded in secrecy and hints at a dramatic conclusion. The plot begins to thicken, but the enigmatic narrative leaves many questions un-answered and renders the film a frustrating, bubbling pot of almost nothing. What first felt like a complicated exploration of loneliness against a monstrous backdrop that dripped with sexual tension, soon becomes tedious and dull. Those who like their horror with a little more bite will find little to enjoy in Darkness By Day’s slow pacing and build which, ultimately, leads to a whimpering finale. This film is barely 75 minutes long, but you will feel every single second with the concept probably suiting a short film, rather than something of feature length.

The story at this film’s centre focuses on the complicated relationship between the two female cousins, who become increasingly attached the longer they are alone together. The pair venture out at the dead of night to sit on the edge of a cliff as the ocean’s waves crash below them. The setting is perfectly ominous and the scene becomes a beautifully dark gateway into the minds of both women, who are both engulfed by a very different, but equally as plaguing, darkness. Anabel probes Virginia about her loneliness, asking her what she does all day and whether she gets bored being in the house all alone. Virginia, of course, answers that she enjoys it, but it becomes clear that there is an emptiness in her that starts to be filled by Anabel’s arrival. These thoughtful moments are when the film is at its strongest, bearing resemblance to the intricate character work that is present in Let The Right One In. However, these similarities ultimately render Darkness By Day as a less effective and inferior version of the touching, bloody Swedish vampire tale. 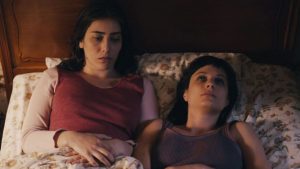 All in all, Darkness By Day is a fine watch, but nothing special. There is enough itching below the surface to ensure you make it to the end, but its lack of imagination and eventual disappointing ending makes it problematic and unsatisfying.