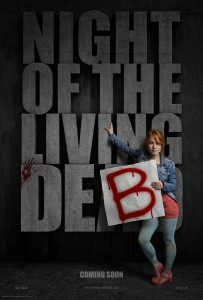 Dark Sky has acquired the rights to the zombie romantic comedy (if you didn’t get that from the headline) Night of the Living Deb from director Kyle Rankin (Infestation). The director is again setting his sights on a post-apocalyptic world, but this one replaces giant insects with flesh-eating zombies.

Infestation was a hilarious action-comedy that proved Rankin could write, as well as direct, something very funny. For Night of the Living Deb, Andy Selsor is joining him on the writing team and will hopefully prove that two minds can be even greater than one.

Check out the trailer for Night of the Living Deb below which features plenty of laugh-inducing and bloody-splattery mayhem, including Deb getting a little too excited as she runs over the undead. The film stars Maria Thayer as Deb as well as Ray Wise, Michael Cassidy and Chris Marquette.

Synopsis:
After a girls’ night out, endearingly awkward Deb wakes up in the apartment of the most attractive guy in Portland, Maine. She’s thrilled, but she can’t remember much of what got her there. Pretty boy Ryan only knows it was a mistake and ushers her out the door… into a full-scale zombie apocalypse. Now, a walk of shame becomes a fight for survival as the mismatched pair discovers that the only thing scarier than trusting someone with your life… is trusting them with your heart.

Night of the Living Deb will be released by Icon Films in the UK and Dark Sky in North America later this year.