John Jarratt and Kaarin Fairfax are making their directorial debut with the dark comedy-thriller StalkHer and we have the trailer to share with you. What looks to be a combination of Stephen King’s Misery, fellow Aussie thriller The Loved Ones and Hope Springs, the trailer shows an interesting blend of humour and thriller tropes, tied together with a strangely sexy, seductive ribbon. 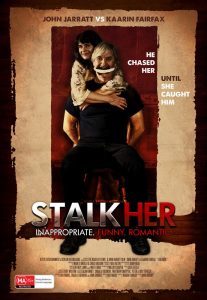 There are times when it feels uncomfortable and it’s a difficult one to get your head round, but it’s impossible not to admit that this looks extremely entertaining. It certainly paints John Jarratt in a new light, even though he has an unmistakeable dark edge to his character here, too.

StalkHer will be released on VOD on 21st October 2016.