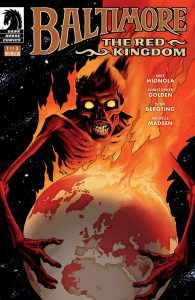 Hellboy creator Mike Mignola has begun a new saga surrounding another of his famous comic characters, Lord Baltimore. Entitled Baltimore: The Red Kingdom, the character’s latest outing has been given a cool animated trailer by publishers Dark Horse, which you can see below.

Lord Baltimore first appeared in the 2007 illustrated novel Baltimore, or, The Steadfast Tin Soldier and the Vampire, by Mignola and horror author Christopher Golden. In 2010, Dark Horse began a comic book series, set in the middle years of the epic tale. It was written by Mignola and Golden, with art by Ben Stenbeck, and marked the beginning of numerous comic outings for the character.

The Red Kingdom sees Baltimore returning to battle the greatest evil he has ever faced, as it threatens to consume the whole world. Mignola and Golden scripted the new series, with Peter Bergting on artwork duties. 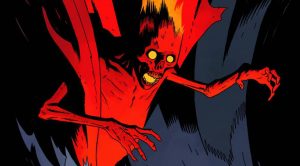 Synopsis:
Lord Baltimore is missing. The Red King—evil incarnate—is taking over the world. Baltimore’s team has been driven apart, with some of them dying on the frontlines while others are in hiding. Since the day he set out for revenge on the vampire who killed his family, Baltimore’s fight has gotten bigger than he’d ever imagined, but what role will he take as evil finally threatens to consume the world?

Issue #1 of Baltimore: The Red Kingdom is available now.